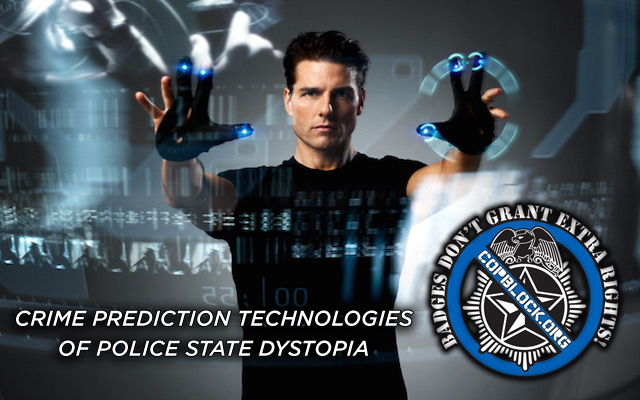 Somewhere in the infinite maze of eternity Philip K. Dick is shaking his head in horror, while police officials begin to usher in technologies that will allegedly predict crime, just as the science fiction authors novels darkly prophecized.

Police in the UK are preparing to introduce new technologies that will allow to them to ‘predict crime’. The new tech, called Person of Interest (POI), was developed by the New Zealand company Wynard. The company works with many western government agencies including the FBI.

So how does the technology work? According to IBNlive.com:

In New Zealand, POI technology is used by the police and government agencies who feed data on known offenders and “at risk” individuals and groups into the system.

The software analyses the data, compares it with emails, text messages and social media files, and alerts law enforcement officials to impending threats.

Describing POI, Stokes said, “It tells you in real-time that these people have done something abnormal and you need to go and check on them. Something unusual is starting to happen.

Because the company is still negotiating with the UK government, confidentiality agreements prevent any more details on how the system will be implemented there.

The current trend in America is also to increase technologies that take the place of old fashioned police work. Many of these items are already in use or soon to be.

The Stingray device, a piece of high tech equipment used to spy on cell phone conversations, has recently come under fire after police departments have been found using the technology illegally.

There are also several new technologies being used to modify police cruisers into computerized law enforcers. Just last week an example of the technology was modeled publicly, with police officials hoping to be able to use it soon. The process has already begun as cruisers are beginning to be fitted with license plate reader technologies.

It seems inevitable that these technologies will only continue to evolve and their usage will soon become widespread. While this is exciting news for technophiles and copsuckers, the truth of the matter is far more horrifying.

The potential for mistakes and abuse of the emerging techno police state are unfathomable. Already the human faith in technology is often an impediment to critical thinking. The possibility that law enforcement technologies will be considered infallible, as the police already often are, presents a real danger to individual freedoms and liberty.

The machine you are using right to read this has probably been undermined by pop-up ads and other minor bugs and scripts in the past. When these same computerized systems are being used to determine the level of suspicion, innocence or guilt of human beings, mistakes could mean imprisonment or death.

While technology has helped man evolve beyond his own physical limitations, it is not always helpful, necessary or justified. A mindless march into a technological police state dystopia was once the stuff of science fiction. Yet if we are not careful and vigilant, like much speculative fiction, it may become a harsh reality.

Help turn back the tide of high tech policing by contacting the US Justice Department and letting them know that these emerging technologies are not welcome.

Strange how paranoia can link up with reality now and then. -Philip K. Dick