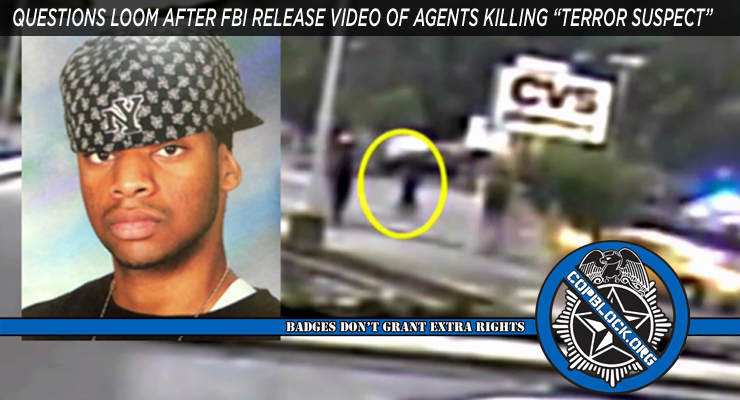 Video has been released by federal authorities showing FBI agents gun down a Boston man labeled as a “terror suspect,” after they said he spoke about harming officers and murdering “Draw Muhammad” contest organizer Pamela Geller during phone calls with his nephew.

The blurry footage, taken from across a parking lot on a rainy morning about 7 a.m. Tuesday, shows Usaamah Rahim walk to the bus stop trailed by plain-clothes FBI agents and police officers.

The federal and local law enforcement officers, part of an area Joint Terrorism Task Force, follow Rahim before a police car arrives with its blue lights flashing and agents surround the man.

The footage shows officers train their weapons on Rahim before appearing to open fire as Rahim is walking away from one of them.

“An FBI agent and a Boston police officer was surveilling the suspect around the clock, both opened fire after Rahim lunged with the knife following repeated requests for him to drop the all-black blade,” police Commissioner William Evans said.

The only problem is that the footage doesn’t appear to corroborate those claims.

At least four law enforcement officers can be seen on the video but it’s hard to make out because of the distance, when weapons were drawn, or if Rahim even had a knife in his hand. There is also no audio on the footage.

It does appear that officers do kick something away from Rahim’s body however after he hits the ground.

Family of the deceased contended, in a statement made Monday, that the video does not confirm federal official and police claims, but instead demonstrates “Rahim was breaking no laws when law enforcement attempted to restrain his liberty.”

Police say they did not approach Rahim with intentions of arresting him. Instead, police and federal agents wanted to talk to him about his “intentions” after learning he had remarked about attacking police officers.

Rahim had reportedly been under surveillance for two years. Officials claim he “liked” an ISIS-related page on Facebook, and that his social media posts demonstrated an admiration for radical Islam.