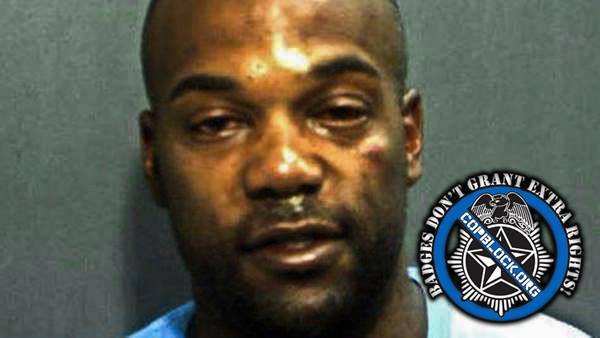 An Orlando police officer is under investigation after a video has been released showing him kicking a man who is merely sitting on the curb at the time. While this is happening, another officer is using his taser on him. According to WFTV9:

In the video from March, Refus Holloway appeared to be handcuffed and not resisting when Officer William Escobar punched him in the head, then kicked him in the leg.

Channel 9 took the video to Orlando police officials, who later said Escobar has been reassigned pending an internal investigation.

All charges against Holloway were also dropped, but Holloway and his sister, Luciarae Fripp, are now taking action against Escobar.

Once the charges were dropped, Fripp said she and her brother went to OPD headquarters and lodged a complaint against the officers involved.

Fripp, a University of Central Florida criminal justice major, said she watched in fear as Holloway was wrongly arrested three months ago and suffered brutality at the hands of Escobar.

Fripp said she started recording the video after one officer kicked her brother. She said the video shows another officer, Escobar, striking him twice on the head when he was handcuffed face down on the ground, dragging him and then kicking him.

“As the officer finishes dragging him, he was like, ‘Sir, listen. I was a cop in the military for five years,'” said Fripp. “So there was really no reason for Escobar to drag him or hit him or kick him or anything else they did to him.”

The police report doesn’t mention those details and only says the officers were called to a fight and encountered Holloway and his cousin acting suspiciously and showing resistance.

But Fripp said her brother and cousin had broken up the fight, which was over by the time officers got there. She said the men who were fighting were already gone.

WFTV legal analyst Bill Sheaffer watched the video and believes the officer was wrong.
“This is a clear use of excessive force without provocation,” said Sheaffer. “This officer needs anger management at the very least.”

Holloway’s sister said she and her brother intend to pursue criminal charges against Escobar.

I can think of no reason whatsoever for the police to have treated this man the way they did. I guess I will just have to wait for the lobotomy patients who haunt CopBlock.org’s comment section to explain it to me. Man, are we glad we have those guys!