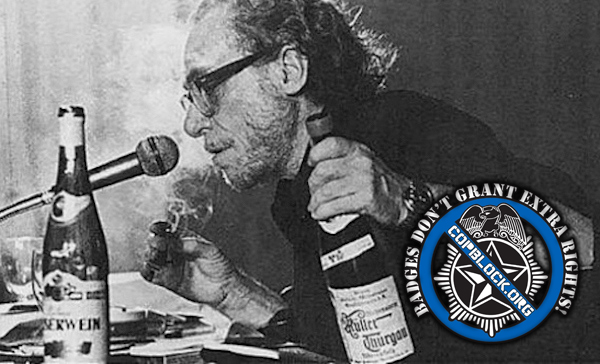 Charles Bukowski was arguably one of the greatest poets of the 20th Century. Unlike some of his more flowery contemporaries, Bukowski was vulgar and obscene, which only added to the brilliant authenticity of his poetic observations of the modern world. Charles was the quintessential dirty old man. A drunk, a gambler and a legendarily lecherous scoundrel; the poet laureate of Los Angeles was all of the rough edges in all of the right places. In his own adventures as a ruffian miscreant and generally prideful nuisance, he learned the hard way how authority was not the friend of the free human.

In the poem below, Bukowski manages to sum up almost every problem of compulsory laws and their enforcement. Despite having heard/read this masterpiece hundreds of times, it still always gives me a chill.

The next day I got up and they had dogs in the trees,
hanging, dead, and dying.
I turned to my friend and I said, “What does it mean?”
And he said,
“Don’t worry about it, it’s the way of things. They took a vote. It was decided.”

And after bacon and eggs the next day,
my friend pulled his pistol on me across the coffee
and said,
“Let’s go,”
and we went outside.
And here were all these men and women in the trees,
most of them dead or dying.
And he got the rope ready and I said,
“What does it mean?”
And he said, “It’s authorized, constitutional, it passed the majority,”
And he tied my hands behind my back then opened the noose.
“I don’t know who’s going to hang me,” he said,
“When I get done with you.
I suppose when it finally works down
there will be just one left and he’ll have to hang himself.”
“Suppose he doesn’t,” I ask.
“He has to,” he said,
“It’s authorized.”
“Oh,” I said, “Well,
let’s get on with it.”

And that is the nature of compulsory laws and their enforcement, as well as an indictment of all of those who do not question those laws or those who enforce them. If it has ever been put more succinctly, I have yet to experience it.