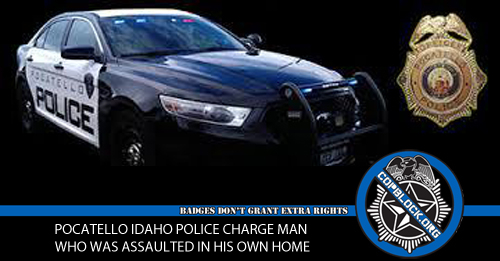 This post was shared by Ryan Thompson via CopBlock.org’s submit page.

On February 16th 2015 the Pocatello police responded to a call to my house over a situation involving an assault and battery. A family member came to my house and assaulted me over a minor family dispute with a 3rd party.

The police officer gave me the option to press charges for battery, and I told him “No, this is family.”

In speaking with the officer, he told me that, “Facebook messages are not illegal,” and that “Offering to box someone is not illegal.” (I have the discovery evidence which includes an audio recording of this conversation.)

After the police officer left, I wrote on Facebook to the perpetrator and said, “If you want to fight me, there is a boxing ring here in town. I’ll meet you there any time you want.”

I was not threatening him, or intimidating him. In fact, with his interview (that is part of the discovery evidence) he admitted to the police that he (the perp) originally offered and advised me of a fist fight, and that “[he does] things old school.”

Looking at the perp’s record, and his step-son’s (the step-son was the instigator) record in the public court repository, these two have a criminal record of “assault and battery with a deadly weapon”, “phone threats and harassment” and “stalking”. I have a fairly clean record for the past 20 years. When I was a teen, I got a pot ticket for simple possession, and since then I have had a handful of traffic infractions, but nothing else.

The next day, the police officer called me and referenced my Facebook message, telling me, “You can no longer file charges against the perpetrator since you wrote this message.” I responded, “You told me yesterday that I have a year to file charges, so since he is using you to harass me, I do now want to file charges.” The officer responded, “If you file battery charges on him, then I will file disorderly conduct charges on you.” I said, “Fine, let’s do that then.”

They did not file battery charges on the man that assaulted me, but instead they gave him “disorderly conduct” charges for assaulting me, which he plead guilty to. They also gave me the same charge.

This man who assaulted me was told (documented) to stay away from us. He came over anyway. He assaulted us. He admitted it to the police. But they wouldn’t press “battery” charges on him, and they retaliated against me too.

I was running a newspaper in Pocatello Idaho, and in my 3rd Quarter release of my newspaper, I criticized their police budget and their purchasing of military vehicles. I also spoke out against the drug war (like I do in every newspaper). I believe this is why the police are retaliating against me, even though I have done nothing wrong.

They offered me a $200 bond forfeiture deal, but I refused it, because I am not guilty. I recorded that conversation too.

I am trying to run a crowd funding campaign, so that I can travel from Maine to Idaho to have this jury trial. Please help me get the word out. More information can be found here; http://goo.gl/r20Ev5