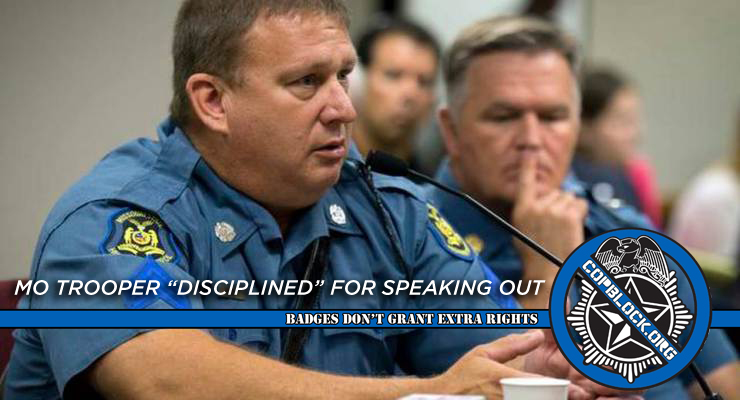 For over a year, there has been concern and an ongoing investigation into the drowning death of Brandon Ellingson (20 yrs) from Clive, IA at The Lake of the Ozarks, MO. while in custody of MO Hwy Patrol Officer Anthony Piercy. After an internal investigation was quickly completed and Officer Piercy found “Not Guilty” of negligent homicide, Ellingson’s family decided to seek help from the Department of Justice. During the last few months, the testimonies of several eye witnesses that were not “allowed” in the initial trial have been heard, officers who questioned Piercy have spoken out, and more audio footage revealed.  Things have started to become more clear as to exactly what happened on the day Brandon was arrested for a BUI then ended up at the bottom of the Lake.

Since the Department of Justice has taken over the investigation, so many discrepancies have been revealed that now the MO Highway Patrol and Officer Piercy are under great scrutiny. In an act of what the patrol is calling “discipline,” Sgt. Randy Henry was demoted to corporal,  moved from Lake of the Ozarks and is now assigned to Truman Lake as of June 11th.

This is what has been described by Officer Henry’s attorney, Chet Pleban, as a malicious intent to “discipline the whistle blower“.

The patrol spokesman, Lt. Paul Reinsch, will not give reason or comment on the demoting and disciplinary action taken.

Trooper Henry’s attorney, Mr. Pleban, asked, in an appeal, for the decision of transfer,

“You’re going to make that man move from his home, where he’s lived for 19 years, and force him to move to Truman Lake? And you’re going to say that’s not retaliation, malicious, and vindictive?”

Patrol Officer Henry was one of several troopers who questioned Piercy after Ellingson’s death. He says what he was told by Piercy on several occasions is not what Piercy initially told prosecutors. He also called for more training on the water for Mo Highway Patrol Officers, backing up allegations of only four hours of training involved to patrol the lake waters, negligence on the part of commanders to even allow him to speak in the deposition, interrupting him mid-sentence, then turning off the recording device being used to gather audio testimony. The MO Hwy Patrol has accused him recently of “disseminating confidential information”.

With all of the questions surrounding that fateful day, it seems that truth is the enemy of all accounts previously given by Anthony Piercy and the Hwy Patrol. It has been found that Piercy had only two days of field training before being allowed to patrol the waters alone. The trooper first handcuffed Ellingson’s wrists behind his back and then, according to witnesses, pulled an already buckled life vest, with armholes, over his head and upper torso. The vest, which wasn’t properly secured, came off shortly after Ellingson entered the water during transport to a zone office for a breathalyzer test. It has been proven that Piercy’s boat was traveling between 39.1 and 43.7 mph in the moments before Ellingson entered the water. During the investigation, the patrol re-created the speed of Piercy’s boat that day. Video shows a patrol investigator needed to hold onto a pole as the boat reached speeds of 38 to 40 mph., which is far too fast for transportation of a “suspect” in a life jacket that was not even the correct type.

Brandon’s father, Craig Ellingson, told the press that Henry’s discipline is uncalled for,

“That’s pretty pathetic. It’s retaliation. They shouldn’t be doing that.”

As more and more information is coming to light, Brandon Ellingson’s family has said they will not give up finding out exactly what happened to Brandon that day. To support the family’s efforts and daily updates you can go to their public Facebook page,  Justice for Brandon Ellingson

Read more about the death of Brandon Ellingson and previous related content: