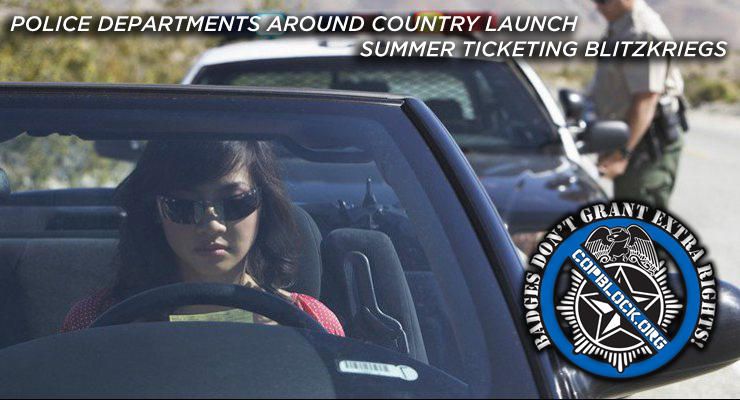 Operation Border to Border, Operation Seeing Red, Operation Thunder – These are the names of just a few of the mass ticketing blitzkriegs being unveiled by police departments across the country just in time for summer.

Predictably, as the fiscal year nears its end in September, wasteful and corrupt local governments seek to pad their balance sheets in preparation of the fulfillment of the years final financial obligations.

The following are some examples of operations currently being launched by state and local police agencies:

For the second time this year, police in Fort Smith, Arkansas have launched Operation Seeing Red.

The 3-week long operation is geared towards monitoring intersections to catch drivers who are speeding through red lights and disobeying traffic laws.

Police say although they plan on watching certain intersections where accidents are more common, drivers should expect to be cited on any street in the city at any time.

Fort Smith Sgt. Daniel Grubbs said that hundreds of tickets were written out to drivers during the first operation in February, resulting in 10s of thousands of dollars in extra revenue for the city.

Grubbs says no warnings will be issued by officers during the enforcement period.

Operation Thunder officially kicked off Thursday night in Georgia, were officers with the city of Rome and Floyd County set up a massive roadblock at the Rome bypass and John Maddox Drive.

Officials say the 60-day program is focused on Floyd County in an attempt to help crack down on dangerous drivers and have assured the public it is not just a ploy to generate revenue.

“We want the citizens of Rome and Floyd County to understand this is not about writing citations. This is not about making arrests,” Rome police Lt. Chris DeHart said. “This is about saving lives and making a positive impact in our community.”

Now at least the mafia or your local stick up kid don’t have the nerve to tell you they’re robbing you for your own good, but DeHart did get stark, saying that like Operation Seeing Red, officers will practice “zero tolerance” during the two month period – meaning no warnings will be issued.

A Georgia state Thunder Task Force will assist in the operation and set up large-scale traffic checkpoints throughout the county, with the support of Rome and Floyd County police, the sheriff’s office and the local Georgia State Patrol post, officials say.

“If you are caught drinking and driving, or not wearing your seat belt, speeding on our roadways or driving while distracted, you will be ticketed,” DeHart said.

State police in the eastern United States seeking to capitalize on one of the most popular summer vacation dates of the year, will again, this weekend, re-engage in Operation Border to Border.

The coordinated traffic safety enforcement initiative, comprised of eight state police and highway patrol agencies, will target approximately 791 miles of U.S. Route 15 – which originates in Waterboro, South Carolina, and ends in Corning, New York, and 124 miles of U.S. Route 17 in the State of Georgia that parallels I-95.

This is the fourth year for the coordinated, multi-state enforcement effort targeting U.S. Route 15 and second year to include U.S. Route 17 in Georgia.

During the 3-day effort, troopers will cover approximately 158 miles of roadway in North Carolina and will be paying special attention to those motorists who are driving careless and reckless, exceeding the posted speed limit and following too closely, officials say. Police in Fayetteville, North Carolina will even be going after people looking to have a good time in Operation Safe-Summer.

In an effort to reduce what officials are calling “house party related violence” in the community, twelve officers will be tasked with monitoring summer parties and events throughout the city’s three police districts.

Police have asked residents to tell them about planned parties before hand so officers can be nearby in case they get too loud or out of control.

“We don’t want to beak the party up,” Fayetteville Police Chief Harold Medlock said. “We want to keep somebody, some young person from dying. That’s what it’s all about.”

Fayetteville Mayor Nat Robinson is also urging the local government to strengthen the effort by passing an ordinance that would fine any homeowner $500 if police have to be called more than once to their residence.

As early 20th century journalist and classical liberal thinker H.L. Mencken said, “the urge to save humanity is almost always a false front for the urge to rule [it.]”

While the guise of “public safety” sways most to accept crimes, that if perpetrated by private individuals, would never be tolerated – the public veneer of “serving and protecting” is slowly starting to fade away to be seen for what it really is: pillaging and plundering.