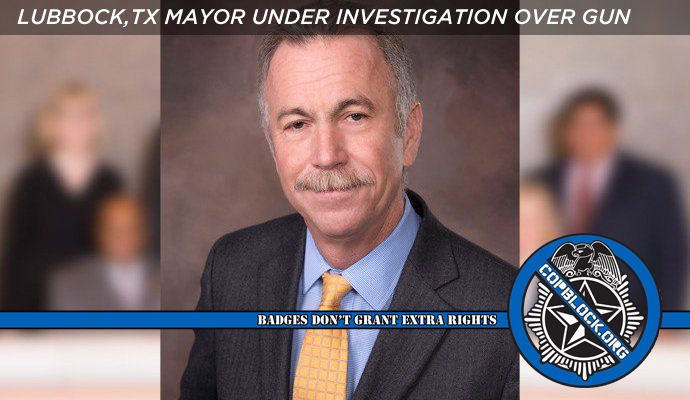 On Monday, June 1st, the Lubbock, Texas police were called to a residence about a disturbance in which we now know Lubbock Mayor, Glen Robertson, was involved. The Texas Rangers have subsequently said they are investigating the Mayor. However, it has now been nearly one week since that announcement and no updated reports have been given to local media or outside sources.

All that is known so far is one statement in the police report made by Daniel Gonzalez, who was in the residence that belongs to Mayor Robertson, when he made the call to  911, saying,

Someone pulled a gun on me and placed me in immediate fear of my life.

He has declined to answer any questions regarding the incident.

We responded to an incident at that location and did an initial investigation. In the interest of objectivity we have referred this matter to the Texas Rangers to do a follow up investigation.

I am aware of the incident in question and I am cooperating fully with authorities. I am unable to comment further at this time and until more information becomes available. So, what exactly happened that morning in the small town of Lubbock? The police and Texas Rangers refuse to comment, as does the Mayor and Gonzalez. It has now been two weeks and residents are beginning to wonder if there is something being hidden from them concerning the Mayor. One thing small towns have that most larger cities do not, is a tightly knit community in which most people know each other well. To one resident we spoke with, it is a huge concern and she says others are disturbed by the fact that the Lubbock PD seems to want to “sweep whatever happened that morning under the rug so people will forget”. But how much longer can the pressure be put on before answers are demanded? Why is it taking so long to investigate? What exactly happened in the Mayor’s home that, even the 911 caller refuses to speak out? Why is local media not pushing for a single update from Lubbock PD and the Texas Rangers? All of these questions beg an answer. After all, as the cops always say, “If you have nothing to hide…”

Every city and State official is automatically held to a higher standard of accountability. The good people of Lubbock deserve to know what is going on right under their noses.