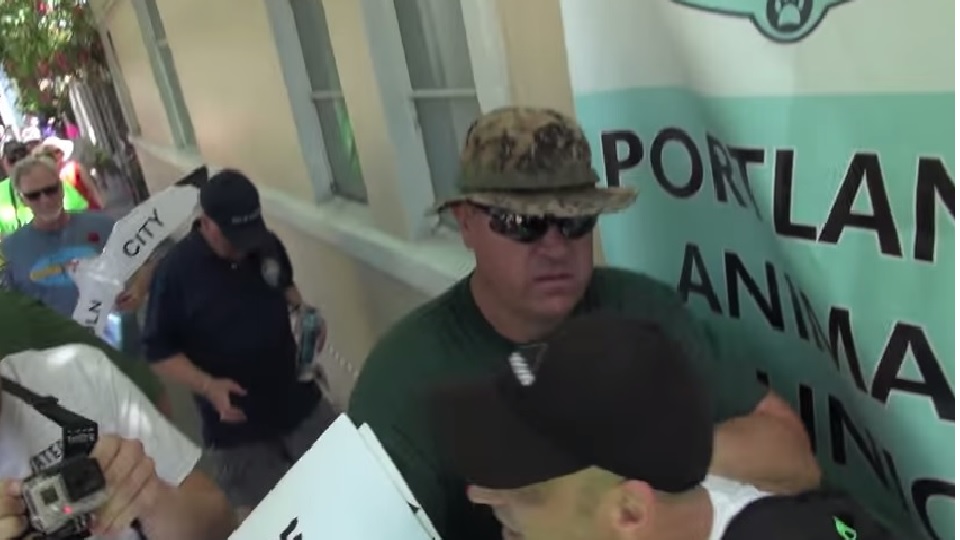 Film The Police Portland (FTP PDX) Journalists Mike Bluehair and Kif Davis were present at the Grand Floral Parade to ask Portland Mayor, Charlie Hales some questions about the homeless sweeps that have been taking place lately. For some time, the mayor has had Portland Police going around the city and evicting the homeless from their camps under the ruse of public safety. Several mayors marched in this parade under the banner of the Oregon Mayor’s Association.

In this 40 minute video, you can see Mike and Kif questioning the mayor about his tactics and why he feels the need to start a class war against these homeless people. Throughout the video you can see members of the mayor’s entourage attempting to interfere with them trying to ask questions and jumping in front of the cameras. Their questions were aggressive, but in no way were Mike and Kif’s actions aggressive.

At the 7:23 mark, you can clearly see Waterloo Mayor Greg Maas enter the video frame and approach Davis in a very aggressive manner.  Maas can be seen grabbing the camera on two different camera angles and breaking it. During the attack, Mayor Maas can be heard saying, “We’re from the country. We don’t put up with this crap.”

You will also see the security detail has Davis pushed up against the wall when Mass approaches. After the camera is broken, you can hear Davis say, “You broke my camera.”  Maas responds with, “I didn’t break your camera, you broke your camera.” This mayor denies breaking the camera even though his actions were captured from multiple angles grabbing and twisting the viewfinder from the camera.

According to a story written by Jeff Manning of the Oregonian:

Davis said he was asking important, valid questions about a series of what he called city “sweeps” of homeless camps. Hales’ “staff was blocking me,” he said. “They were pushing and shoving. Then this Waterloo guy comes running, gets right in my face and grabs my camera lens, torques the viewfinder and breaks it. This all happened right in front of Hales.”

Mike Bluehair, an activist-ally of Davis who filmed the altercation, said Maas went out of his way to confront Davis.

Maas said he was concerned for his family’s safety. His wife, five kids and one grandchild accompanied him to Portland. He said his 9-year-old daughter was so upset by the rancor of the confrontation she broke out in tears.

“I didn’t overreact,” said Maas, a former U.S. Marine. “If I overreacted, he would have been hurt. I do know how to handle myself. I’m not afraid to protect myself or my family.”

The story then goes on to quote Mayor of Enterprise, Steve Lear as saying, “The guys with the cameras were clearly the aggressors,” he said. “They just kept on pushing and pushing, dropping the F-bomb, and worse. Frankly, I’m surprised the guy from Waterloo didn’t end it with one punch.”  In saying this, it would be correct to assume that Mayor Lear justified physical violence even though Mike and Kif at no time posed a physical threat during their questioning of Mayor Hales. Whether the reader agrees with the tactics used by Mike Bluehair and Kif Davis in the video or not, the issue at hand is whether Maas had the right to assault Davis when there was no clear physical threat from either of the activists. Mayor Steve Lear claims that the two activists were the true aggressors, but you can clearly see that Mayor Maas interjected himself into the situation and approached Davis.

Mayors are public officials voted into office and are tasked with serving those that live in their city. Part of that job entails answering questions brought to them from members of the public. Mayor Hales could have easily changed the whole tone of the incident had he either answered some of the questions or even extended an invitation to meet with Mike and Kif at another time to address their concerns.  Instead, he ignored the questions and eventually jogged away.

In the comment section of a shortened version of the video, Mike Bluehair confirms that criminal charges have been filed.

You can listen to a break down of the events here at the Opperman Report.