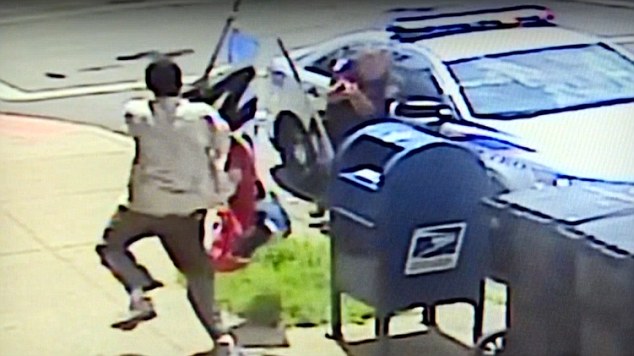 In what is becoming a far too common occurrence, another life was taken by the hands of a police office this time in Old Louisville, KY on the afternoon of June 13, 2015.  Police responded to a call of an assault involving a female and a male.  It was reported that the female had sustained unspecified injuries due to the assault.  Upon arrival, police found a man matching the description of the person involved in the assault.  After the initial contact with the suspect and a brief conversation, the responding officer reports that the man grabbed a flag pole and approached him while swinging the pole.  The report goes on to say that the officer stepped back and opened fired hitting the man twice in the side.  He was rushed to the hospital where he later died from his injuries.  In the attached video you will see that the officer’s account of what led to the shooting are correct.  The officer is currently on administrative leave pending the outcome of the investigation into the shooting.

There is no denying from the video that the suspect attacked the officer with the flagpole.  The question here is whether use of lethal force was justified or not.  As the suspect begins to swing the flagpole at the officer, you see that it comes apart into two pieces.  The pole was not one solid piece and appears to be one of the cheap aluminum flagpoles one would purchase at a discount store.  Of course, being hit with a lightweight piece of aluminum would hurt and maybe cause some bruising, but nothing life threatening.

I am not denying that the officer had to make a split second decision, but let’s look at all of the options here.  Before the man comes at the officer with the flimsy weapon, the officer has already committed to the use of lethal force by drawing his service pistol and aiming it at him.  To be fair to the officer, it is not clear from the video if he was armed with a taser or not, but it would be safe to assume that he had other none lethal weapons such as a collapsible baton and pepper spray.  What I do see in the video is a very large mailbox that could have been used as a barrier while he deployed his pepper spray to neutralize the threat. Now let’s back up to the initial contact when the officer first approaches the man.  Shortly after engaging the suspect in conversation, you can see that the man is becoming agitated by the way he begins moving his arms around and then starting to walk away.  He appears to be unsteady on his feet as if he is drunk.  At that time, the officer would have been justified in going hands on to gain control of this guy based on what is seen in the video.  Let’s keep in mind that we do not have the luxury of audio in this video and do not know what words were exchanged.  With that being said, I do not see any problem with placing him in cuffs; based on what we see, until the officer can establish what had taken  place before his arrival.

I believe that the officer lost control of the situation as soon as he let this man begin to walk away from him.  He hesitated and gave the suspect plenty of time to acquire a weapon.  Why did he not restrain him as soon as he began to walk away?  Had he been handcuffed after his agitation and aggression first showed, the outcome would have been quite different and the man would still be alive today.

Why are police so quick to take the life of another human being?  Time and again we are being told that officers are out there putting their lives on the line everyday, but there are way too many news stories lately that paint a different picture.  Where is the risk when an officer bypasses using his other options at his disposal and goes straight for the gun?  I don’t think anyone disagrees that going home to your family in one piece at the end of a shift is a good thing, but are we really to believe that this officer was in fear for his life of a weapon that fell apart during the initial swing?

As a U.S. Army veteran I have had the opportunity to travel to other countries and see first hand how officers from those countries handle similar situations with aggressive suspects.  Some will argue that many other countries do not have the hardened criminals that we do in this country and that our criminals have easier access to firearms than many other countries. The flaw in that reasoning; as it pertains to this situation, is that this man was not armed with a gun.

The true difference between other countries and the United States police may boil down to training.  While living in Germany, I was witness to many police interactions with aggressive suspects and never once saw an officer have to draw their weapon.  In each instance, the police were either able to calm the subject down or use minimum force to gain control of the person with limited force.

In police academies across the U.S., how much time is really spent on critical thinking skills to arm these officers with the tools they need to take a suspect into custody with the least amount of risk of injury to both the suspect and the officer?  What kind of continued training is taking place after leaving the academy to keep those skills fresh?

Sure, it’s easy for me to sit here behind my computer and say that so and so should have done this or that, but I’m not the one being paid to serve and protect our nation’s citizens.  I am also not judging one way or another, but simply raising questions as to whether there were other options at hand that could have helped avoid taking this man’s life.  Was this officer justified in his use of lethal force?  With the information currently at hand, I can’t say yes or no.  Were there other options rather than shooting this man?  Yes!

These are just some things to consider as we continue to try to understand what to me seems to be a growing number of police involved shootings where the suspect never gets his day in court.  I’ll leave  you to make your own decision on this one.