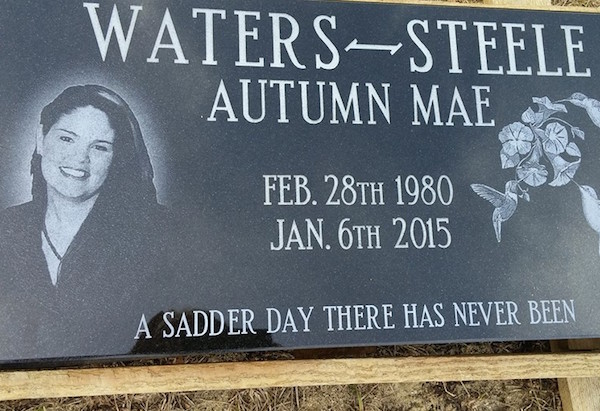 On the morning of January 6, 2015 Officer Jesse Hill of the Burlington Police Department (Iowa) responded to a domestic violence call at the home of the Steele Family. During the course of the investigation the families dog began barking and jumping on Hill. So, of course being a police officer, he immediately decided to shoot and kill it. That plan, however, backfired immensely when the officer slipped and began to fall- mid shot. As he fell, his bullet was assigned a new trajectory that ultimately ended the life of Autumn Steele, aged 34.

From the Iowa law pertaining to Involuntary Manslaughter, Misdemeanor:
“unintentionally causes the death of another person by the commission of an act in a manner likely to cause death or serious injury”

Although this was exactly what Officer Hill did on that icy January morning, Des Moines County Attorney Amy Beaver declined to file charges after an investigation by the Iowa Dept. of Public Safety. The officer was also allowed to keep his job and did not face any disciplinary actions.

To add insult to manslaughter, the Iowa D.P.S. then refused to release much of the evidence in the case. Only a twelve second bit of footage from the officers body camera has been released so far, leaving a crucial gap in the evidence available to concerned family members and citizens.

Although the family of Autumn Steele has made an official public records request for the missing information, as well as a personal written public plea from the woman’s mother, Gina Klinner Waters-Colbert, they have been denied. Iowa Law gives investigators discretion into what can be released, even after the investigation, which more often than not results in this information being buried in a vault. Probably labeled ‘Public-LOL-Records’.

Assistant Attorney General Jeff Peterzalek has been tasked with the tasteless job of explaining to Steele’s family and the public why their records requests have been denied. In a public relations twist that is equally irrelevant and asinine, Peterzalek claims that they refuse to release more of the video, as some of it contains footage of the dying woman partially undressed during emergency treatment after the shooting. The 911 call transcript, dash cam footage and pertinent e-mails have also all been kept under wraps.

While there is no doubt that the shooting was accidental, the laws are clear. The very same laws Jesse Hill was assigned to enforce are laws he is not being held accountable under. His badge has granted him an exemption status from the consequences that come from breaking those laws.

Call the Iowa Department of Public Safety to request they release all of the investigative materials in the death of Autumn Steele @ 515-725-6000
or e-mail them at dciinfo@dps.state.ia.us

Meanwhile the State of Iowa has created a legal process in which ‘transparency’ is little more than a scary buzzword to be avoided in polite conversation during office hours for its legislators, judiciary and enforcement branches. The same ‘discretion’ granted to the state to protect its mistakes and possible trespasses is something you certainly will not hear about from officers who ‘compulsively’ enforce the rest of the laws. But only against citizens.

Call the Iowa State Legislature and urge them to honor their commitment to citizens to provide transparency, acountability and justice @ (515)281-3592 or (888)426-6283
or e-mail them at ombudsman@legis.state.ia.us

I had a bit of time to speak with Autumn Steele’s mother this evening. As you might imagine, the experience that has been foisted upon her and the rest of their family and friends has been terrifying. Not only was their beloved Autumn taken from them, but those who did it have acted within the veil of secrecy and conspired within the shadow of the law to withhold information and deny them justice and the closure they hope it will bring.

Autumn was married and had two sons. Her family remembers her as intelligent, funny, inventive, imaginative, wise, insightful and above all- loving. She was a talented musician who inspired those around her with her creativity and eclectic tastes. Autumn showed strong leadership skills, determination and responsibility from a young age, which she carried into her career as a dental technician and hygienist. Most of all she was a dedicated mother to her two children Kai (7) and Gunner (3), who will never fall asleep to the music of her loving embrace again. Nor will they ever have a good explanation for how and why this happened, if the Iowa Dept. of Public Safety and Iowa Legislature have anything to do with it.

The following is a passage from her eulogy-

Like the season, Autumn radiated beauty and color…the splash of gold, rust, green, and red that envelop your senses when you marvel at nature’s artistry are the colors that framed her beauty….her warmth reminds you of that first fire you huddled around when the season’s brisk air surrounded you….her smile and sparkling eyes show as bright as the stars and moon on a crisp Autumn’s night…. her laughter and joy echo off the still air, and her love of life swirls around you like the winds of a changing season….

The friends and family of Autumn are having their fourth gathering this Tuesday, June 15th to protest the lack of accountability, transparency and justice in her tragic death by the very hands that were supposed to protect her. The protest will take place in Burlington, Iowa at 1:00 PM.

To get more details, go to the Facebook Event Page
we have created to help spread the word

This past Saturday many Iowans came out to join us in Des Moines to protest the killing of Ryan Bolinger. We hope that many of you will join your voices to tell the makers, judges and enforcers of Iowa law that the unanswered death of Autumn will not stand, in a voice so loud they cannot help but hear it.