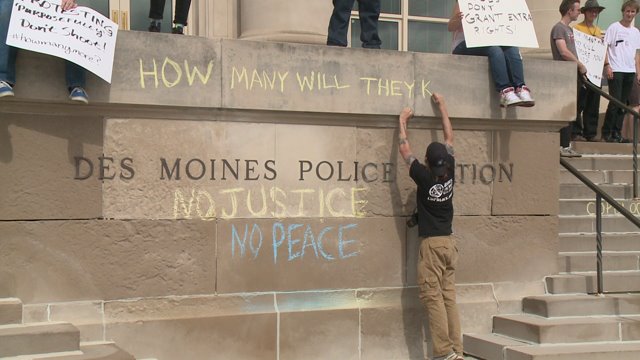 On Saturday June 13th Ademo, Deo and myself organized and attended an event in Des Moines, Iowa to protest the senseless police homicide of a young man who sought desperately for help from those who killed him. We met a lot of great people and were able to have some great discussions about police accountability and transparency. We brought attention to Ryan’s tragic death and spread the message that ‘Badges Don’t Grant Extra Rights’ and reminded those present and anyone else watching to ALWAYS FILM THE POLICE!

We got a lot of great footage while we were there, as well as a lot of new information about Ryan; his life, the desperate plight that led to his killing and the struggles of his family and friends in trying to understand what happened to their loved one. We will be bringing you all of that footage and information very soon.

In the meantime, we were delighted to have gotten such a great response from the local media. They were friendly, inquisitive and seemed genuine in their own concerns regarding Ryan and his family. We are grateful to them for all of their support and for helping us to spread the message. Below are some links, videos and quotes from their coverage.

“More people are waking up to the fact that police are doing this with immunity. They have the support of a broken system so it makes it easy for them to get away with that they do,” said Deo Odolecki. “Right or wrong, whether it was a mistake or not she (Office Miller) still killed somebody. That should have consequences.”

“They need to be more transparent about the situation, maybe that officer needs to come forward and explain her side of the story,” said Ademo Freeman, the founder of CopBlock.org from Cleveland, OH.

“Ryan is everybody’s brother, or cousin or father or uncle or son. This can happen to anybody here. It can happen to anybody’s family member,” said Joshua Hotchkin, an organizer of the event. “Police have to follow laws, badges don’t grant extra rights. You’re not allowed to kill somebody because you feel threatened when there’s no objective evidence that you are actually being threatened.”

“I hope you know there are people out here that care about what happened and are willing to stand up and say so, so there can at least be some justice,” said Hotchkin.

From The Des Moines Register:

“It’s just something we need to pay attention to,” he said. “The most important thing we can do is film the police … to hold them accountable.”

“We want the police to know that they can’t get away without people caring,” said Joshua Hotchkin, one of the organizers. “There are people watching them.”

“Do I expect that I will get into any trouble for this? I would hope that the police department here at least understands that the freedom of speech and chalk is not damaging anyone’s property,” Freeman said.

“They said that they have those doors locked for their safety and because they didn’t want to cause a disruption to normal police business. When police business is killing innocent people in the street, it’s time to allow some disruptions,” Hotchkin said.

Thank you again to everyone who came out and joined. We really enjoyed meeting with all of you, as well as the support and respect you showed Ryan’s family and friends and CopBlock.org by keeping everything classy and peaceful. You’re the best!