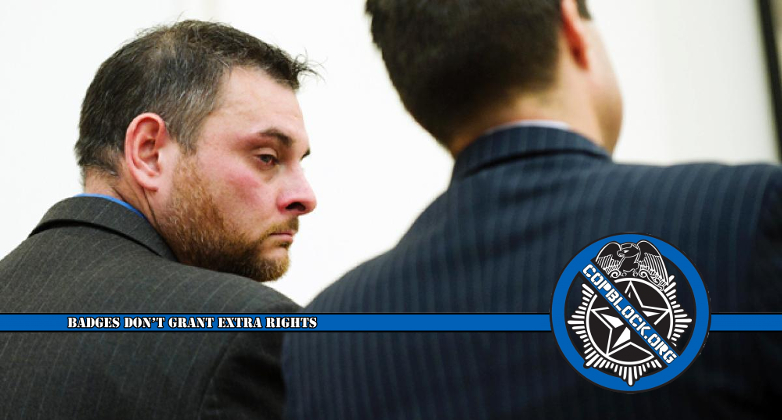 The following post was shared with the CopBlock Network anonymously, via the CopBlock.org Submissions Page. It was originally published at the Gothamist by Ben Yakas under the title, “Drug-Planting Cop Cries At Sentencing, Avoids Jail.“

The post details the court appearance of Jason Arbeeny, an NYPD cop who was caught planting drugs on innocent people in order to meet department arrest quaotas. During his sentencing hearing he began crying and begging the judge not to send him to jail. Amazingly enough, the judge actually stated that he had intended to sentence Arbeeny to jailtime, but instead decided to give him a probation as a result of his courtroom breakdown.

Do you think things would have gone the same for anyone who hadn’t committed their crimes while wearing a Magic Suit and Shiny Badge or was this just the typical Policeman’s Discount in action?

The Brooklyn South narcotics detective who was convicted of planting drugs on a woman and her boyfriend was sentenced to five years’ probation and 300 hours of community service. Former cop Jason Arbeeny, a 14-year NYPD veteran, was previously found guilty of eight counts of falsifying records and official misconduct for planting drugs on innocent suspects—a crime he claimed he did in order to reach quotas. Arbeeny broke down in tears at his sentencing today: “I can’t look at myself in the mirror anymore,” Arbeeny told Brooklyn Supreme Court Justice Gustin Reichbach. “Sir, I am begging you, please don’t send me to jail.”

Arbeeny tearfully apologized to his victims: “My oath went down the window, my pride went out the window,” he said. And Reichbach was moved by his tears: “I came into court this morning determined that the nature of this crime requires some jail time,” he said. “I frankly didn’t expect the defendant, at the 11th hour, to be making these claims.” Arbeeny, who mentioned that his young son is in therapy after threatening suicide over his father’s fate, was facing up to four years in prison.

Arbeeny had been found guilty of “flaking”—planting a twist of crack under a car seat during a Coney Island bust in January 2007—and for doctoring paperwork to make the arrest last. Altogether, “flaking” has reportedly cost the city $1.2 million to settle cases of false arrests.

During the trial, Justice Reichbach made a direct connection between “flaking” and the arrest quotas which the NYPD has repeatedly denied exist, or referred to as “productivity goals”—Reichbach noted that several witnesses said narcotics officers were expected to make 60 percent of their arrests for felonies and that cops would spread collars around so they could all meet the quotas. He specifically pointed to the “mindset in Narcotics that seemingly embraces a cowboy culture where anything goes in the never-ending war on drugs.”