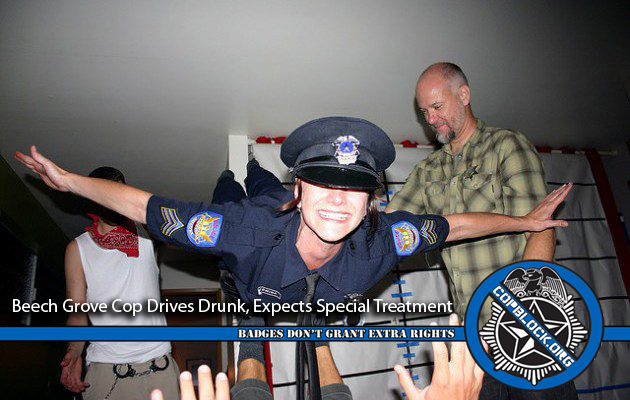 An officer in Beech Grove, Indiana, who was an investigator on the recent Wal Mart fight case there that made nationwide headlines, was arrested on Sunday for operating a motor vehicle while heavily intoxicated. During the arrest and booking the officer was highly uncooperative with her colleagues, expecting special treatment because she wears a badge to work.

Some time about 10pm on Sunday, reports were made of a drunken woman in a vehicle outside of a Speedway gas station. The Johnson County Sheriff’s arrived to investigate and found Jill Liter, 40, sitting in her Chevy Denali. Liter, who was in her personal vehicle, was not on duty at the time.

A store worker claimed that while he had not seen Liter driving the vehicle, he had seen her exit the vehicle and struggle doing so. She then came into the store, appearing to be drunk, she struggled with the card reader at the register. This was later confirmed via store security footage.

Deputies then spoke with Officer Liter and were able to smell alcohol and noticed her speech was slurred and her eyes were bloodshot and reddened. She refused to submit to a breathalyzer and claimed that she only had ‘a few beers’ over at a friends house.

As the investigation continued, Jill became increasingly uncooperative, belligerent and made it clear that she expected to be let go. The idea that her illegal actions would carry consequences, as they would for everyone else, was something she was unable to swallow. Her entitled attitude caused her to act in such a way that deputies had to mildly restrain her in order to handcuff her.

Her verbal abuse continued on the way to jail, while also demanding to speak to her supervisor. She was eventually booked into jail and then taken to the hospital for a blood test to determine her blood alcohol content. Liter continued to be uncooperative and demanding for a time, until she was eventually able to calm down.

The Beech Grove Police Department has released the following statement:

We are aware of the arrest of Officer Jill Liter. At this time she has been placed on administrative leave pending further investigation. Officer Liter has an exemplary police record and is an asset to the Beech Grove Police Department. It should be noted that she was in her personal vehicle and off duty at the time of her arrest. This is also an isolated incident involving one of our officers and not indicative of the behavior and high standards we have for our officers. We do not condone Officer Liter’s actions but need to let the judicial process proceed. We will have no further comment at this time.

It seems unlikely that the incident was completely isolated, and more so that nobody else has gotten caught. Yet. There have been a number of cases of off-duty officers driving while intoxicated, as well as many cases where other laws have been broken by cops who expected special treatment from the legal system.

In the climate of police killings and brutality across the United States, we wish that officers would give citizens the same above mentioned right to the judicial process before acting as judge, jury and executioner in the streets.