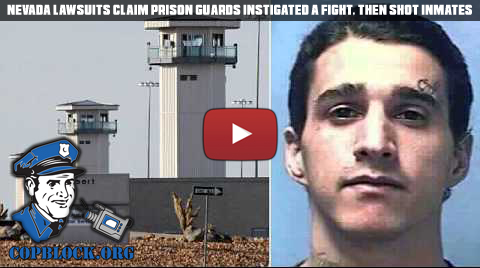 A lawsuit filed in April by the family of a man killed when a corrections officer opened fire on two prisoners as they fought in a hallway leading from the showers claims that fight was intentionally orchestrated by guards in order to justify murdering the inmates. A second lawsuit filed by the other prisoner, who survived the shooting, but was gravely injured, adds allegations of a coverup by prison officials.

At the time of the fight, both inmates had their hands cuffed behind their back and seemingly could have easily been controlled by the three guards present, without the need for the use of a firearm. Instead, they were shot four times in the head and upper body with a shotgun. Both lawsuits maintain that the inmates did not represent a threat to the guards sufficient to justify being repeatedly shot.

The incident, which took place on November 12, 2014 at High Desert State Prison in Indian Springs NV, has prompted numerous questions about past shootings at the prison and the quality of training and hiring practices for prison guards within the Nevada Department of Corrections. Nevada prisons have also faced ongoing and long term criticism for the lack of medical care for inmates, including not properly treating gunshot wounds inflicted by guards. Nevada prisons throughout (and prisons nationwide) have an extensive and documented history of abuse and mistreatment of inmates by guards.

The two inmates, Carlos Perez and Andrew Arevalo, were restricted to solitary confinement when the incident took place. Simply the fact that they were in the hallway together in the first place, represents a severe violation of policy. Per NDOC rules, inmates on solitary confinement are not supposed to be taken to or from the different areas of the prison at the same time, specifically in order to prevent such fights from happening.

In addition, Perez, who was killed by the (as yet unnamed) guard’s shotgun blasts was being held in protective custody (for undisclosed reasons) and therefore likely would have been a target of other prisoners. That has added to speculation that the two were intentionally allowed to cross paths with the expectation that an altercation would take place between them. Cal Potter, the lawyer for the Perez family, characterized the fight as a “gladiator-like” scenario created by those guards.

Subsequent to the fight, Arevalo was internally convicted of assault and murder charges by the warden of the prison, although the murder charge was overturned once it became public as part of the lawsuit. Arevalo’s attorney, Alexis Plunkett, maintains that those charges were part of a cover-up by prison officials. She states that the guards present at the time actually placed the shotgun in Arevalo’s hands, in order to make it look like he had shot Perez and then been shot by the guard. Plunkett says that the guards were expecting both inmates to die from their wounds and that their version of events would be the only one available.

Questions have also arisen about why it wasn’t disclosed until months afterwards that a firearm was involved in the death of Perez. In fact, his own family was not told that he had been shot and only discovered it when they looked at his body in the morgue. It wasn’t until March of 2015, over four months later, that the cause of death for Carlos Perez was finally made public.