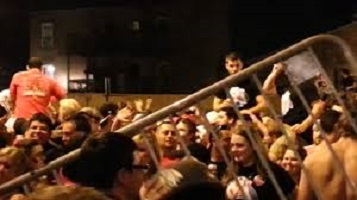 Just hours ago, thousands took to the streets of Chicago for the aftermath of the Stanley Cup Championship.  Shortly after the game had ended, the stadiums of people flooded the streets and bars in search of celebration. The Chicago Blackhawks won the cup, once again. It should also be noted that a tornado warning had been issued for the Chicago-land area at that time.

As the night progressed and more alcohol was consumed, things became increasingly more unruly. There were reports of fights breaking out at the nearby McDonald’s, reports of domestic abuse and even a report of glass bottles being thrown at officers.

Let’s look at a few examples in which things of this nature have already taken place, but were not considered a “riot.”

You may remember the pumpkin festival being covered by mainstream media, while the peaceful protests happening in Ferguson, MO were ignored. Why is it that thousands of people are voluntarily able to come together as a single entity for a sports game; even going to the extent of destruction, but are unable to unify on important social issues?

It is hard to imagine that this country’s forefathers would have been more concerned with a game, rather than the freedoms and liberties of the American People. It is extremely doubtful that there were ever any reports on Samuel Adams having his hairy chest painted with the colors of his favorite sports team.

It isn’t surprising that with the amount of effort and money put into sporting events, that there is such an emphasis put on them. Every day, people are bombarded with advertisements and merchandise on their way to work, while they shop, and on their TV sets and smartphones. Professional athletes are paid millions of dollars every year to play games, while our nation’s teachers are paid barely enough to get by. People will pay thousands of dollars to attend a professional sporting event, but won’t attend a protest regarding an unarmed man killed and left for dead by Police. It is unquestionable that human beings need recreation and pleasure. Entertainment is a way for us to escape our busy lives. A quote from the book Bread and Circuses reminds us, “The evil was not in bread and circuses, per se, but in the willingness of the people to sell their rights as free men for full bellies and the excitement of the games which would serve to distract them from the other human hungers which bread and circuses can never appease”.

“Plays, farces, spectacles, gladiators, strange beasts, medals, pictures, and other such opiates, these were for ancient peoples the bait toward slavery, the price of their liberty, the instruments of tyranny. By these practices and enticements the ancient dictators so successfully lulled their subjects under the yoke, that the stupefied peoples, fascinated by the pastimes and vain pleasures flashed before their eyes, learned subservience as naively, but not so creditably, as little children learn to read by looking at bright picture books. Tyrants would distribute largess, a bushel of wheat, a gallon of wine, and a sesterce: and then everybody would shamelessly cry, ‘Long live the King!’ The fools did not realize that they were merely recovering a portion of their own property, and that their ruler could not have given them what they were receiving without having first taken it from them.” – Etienne de La Boétie (1548)