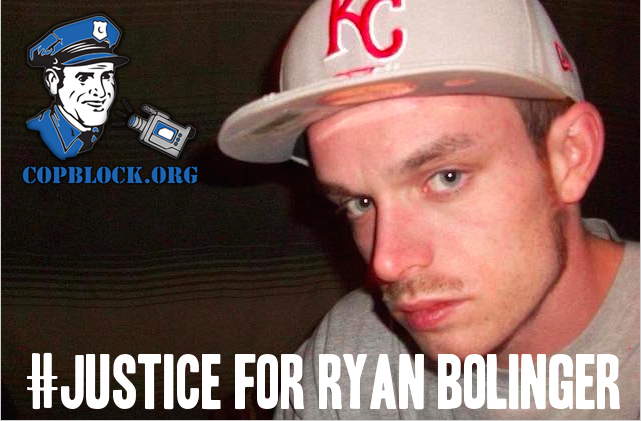 On June 9th, 2015 Ryan Bolinger stopped his car next to the squad car of Ian Lawler, who was on an unrelated traffic stop, and got out to start dancing. Bolinger’s car was so close to Lawler’s that the officer couldn’t get out of the car. After a short while Bolinger got back into his car and proceeded to drive away. That’s when Lawler abandoned his traffic stop and started to follow him. At some point Vanessa Miller, also of the Des Moines Police Department, joined the low speed “chase.”

When Bolinger went to make a U-turn at an intersection he was boxed in by Lawer from the front and Miller took a position at the rear of his car. That’s when Bolinger once again got out of his car and started walking towards Miller who was inside her cruiser at the time. Bolinger had nothing in his hands, no weapons on his person and was merely walking towards Miller’s cruiser when she shot him through her rolled up window. He later died at the local hospital, leaving a fiancée  and unborn child.

Above is just the very basics of what happened Ryan but below are ALL post written (by CopBlock.org Contributors and other outlets) about him as his family and the community seek justice.

WHAT CAN YOU DO TO HELP SEEK JUSTICE?

– CALL FLOOD the Des Moines, IA Police Department (515-283-4824). Demand that they release all video footage and audio recordings of Ryan’s death, demand they put their officer though the same procedures they would anyone else and demand open communication from the department heads.

On Saturday June 13th Ademo, Deo and myself organized and attended an event in Des Moines, Iowa to protest the senseless police homicide of a young man who sought desperately for help from those who killed him. We met a lot of great people and were able to have some great discussions about police accountability and transparency. We brought attention to Ryan’s tragic death and spread the message that ‘Badges Don’t Grant Extra Rights’ and reminded those present and anyone else watching to ALWAYS FILM THE POLICE!

This killing was absolutely unjustified. A young man was killed for no apparent reason, leaving behind a fiancee and three children, one yet unborn, who will never know it’s father. We do not want that family live in and a world that won’t let his death be met with indifference.

This shooting backs my post, “United States Police; You’re Doing it Wrong”, where I highlight how Netherlands police dealt with a drunk suspect who was aggressive, kicking at officers, as well as swearing, but wasn’t tased, abused or shot dead – go figure. While in America the police encounter those who are in of need of help with deadly force. This is a direct reflection of the training here in the United States for police officers. They are told during training that everyone is dangerous and that they should resort to their weapons first and foremost. This policy has made the USSA police the most violent police force the world has ever known.