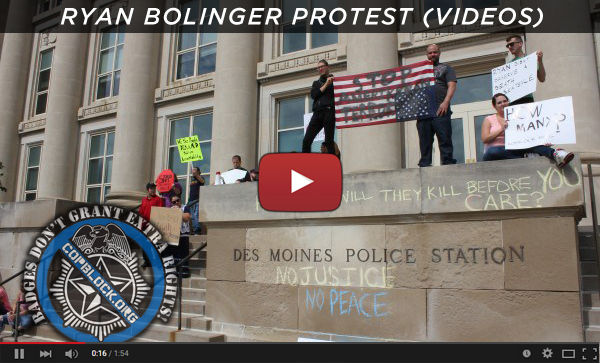 Last Friday DEO and I left Cleveland, Ohio and drove through the night to Joshua’s place in Iowa. Sadly, this all night road trip wasn’t a social one, it was a police accountability one. Earlier in the day, Joshua had decided, since it was his home state and no one else had yet, to hold a protest for Ryan Bolinger, who was killed by Des Moines Police last Tuesday. Ryan was unarmed and, according to his friends and family, was more than likely searching for assistance when he was shot by Vanessa Miller through the window of her patrol car (read my first blog post here and/or visit the META post here).

Note from Joshua: Ryan had recently tried seeking assistance with an addiction and had been turned away from treatment. He may have become so desperate to do right by himself and his family that he engineered a scenario where the police would arrest him and the courts would force him into treatment. I don’t think he ever imagined he would be shot and killed for this. He had no prior record and his loved ones describe him as an easy going guy, who really loved his kids.

This case, IMO, is so egregious and such a clear case of excessive force that I had to assist. I couldn’t believe the police would try to justify shooting an unarmed man, from the safety of their car, as he ‘walked’ toward them? DEO and I had to give our support to this, so off we went.

We arrived at the Des Moines police station at around 3:40 pm on Saturday and there were already a handful of people waiting outside. It also seemed that every single media outlet for 50 miles was there, too – well done Joshua. While Joshua did an interview with one of the local stations, I popped around the building to get a feel for the surroundings. I guess DEO was doing the same and both of us had encounters with Des Moines Police Employees. (See video below.)

Officer “None of my business” was the officer I encountered first and he seemed to not only be upset about the people/cameras, but also in support of Miller’s actions. Now he didn’t say it exactly, but he did say, “Maybe she had to.” At that time I asked him if he would have shot Ryan, but he said he didn’t know because he wasn’t there. He then tried to take a few more stabs at me, as most police do, so I gave him my, “I’m paid by people who voluntarily pay me” line. Which is the opposite of how the police are paid, they take your money whether you like their service or not.

DEO’s interaction was some what of the same, as he got some slack from one DMP officer, who questioned him for filming. He even made it a point to state he was “going home” and “off duty.” Yet, he was still wearing the uniform and on public space, so DEO kept that camera rolling. Like more officers who were asked about Bolinger, this one shut down around that time too, but did say he supports filming the police. That was probably just the usual lip service we often hear from the police.

After our lap around the building DEO and I ran into each other while I chalked, “Badges Don’t Grant Extra Rights” on the sidewalk. Another MDPD employee noticed my art work and wandered over to check it out. DEO took all my fun away when I was trying to get the officer to guess what I was going to write on the sidewalk. I was nearly done and the only word remaining was “RIGHTS.” Now how funny would it have been to watch her struggle for a few minutes over that, oh the irony!

Before I knew it there were, by my estimate, nearly 100 people there protesting; including media. Folks held signs, chalked the police station, voiced their grievances and attempted to reach out to the police. We handed out CopBlock.org Warning and 3×5 Flyers (get yours here or in the CopBlock Store) to those passing by, while leaving a stack for those who live in Des Moines. All of which is made possible by the CopBlock Network and our relationship with LibertyStickers.com. The video below is an overview of the protest that was compiled from the footage taken by Josh, DEO, and myself.

The police avoided the protest like the plague and I was a little surprised by that. Usually, the police will linger around and claim to be present for ‘your protection.’ At a bare minimum they normally drive around or park nearby where they can observe. They didn’t even come out when we started chalking on the building or when a group of protestors attempted to enter the police station. Of course, the police seemed to have anticipated that and locked the doors, claiming it was for their protection and to not disrupt ‘official police business’, but how silly? To be afraid of a bunch of protestors who just wanted some answers and/or accountability. Around 6 pm, the protest started to die down and a group of us decided to head over to the intersection where Ryan was shot. We stayed there for nearly two hours once again holding signs, chalking the sidewalk and handing out CopBlock Flyers to anyone who would accept one. We also tried to locate any business at the intersection that might have caught the shooting on camera but not even the gas station on that corner has cameras pointed to the street. That was a crushing blow, because now we’ll have to wait on the police to furnish their audio and dash cam recordings.

Which brings me to my final point. The first protest might be over, but the work is far from done. The standard protocol is for the police to take six months or more investigating themselves. During this time they’ll keep all evidence in their possession, interview witnesses at their convenience and eventually crawl out from their rock to say that the shooting was ‘justified.’ WE CANNOT LET THIS HAPPEN.

Consider taking part in one (or more) of these “How to Help Ryan Get Justice” ideas.

– CALL FLOOD the Des Moines, IA Police Department (515-283-4824). Demand that they release all video footage and audio recordings of Ryan’s death, demand they put their officer though the same procedures they would anyone else, and demand open communication from the department heads.

– Donate to Ryan’s family via their GoFundme account. Vanessa Miller has left the Bolinger Family in a very difficult position. If you’re able to help them through this rough time, it would be greatly appreciated.

– Participate in upcoming protests and calls of action. This is still very fresh for everyone and the family is currently grieving but in the near future they will need your support. On the ground, on the internet and any other way you can think of. Book mark Ryan’s META POST and check back often for updates.

Even if there isn’t much you can do for Ryan directly, there are hundreds of folks out there experiencing such tragedy as they are. Help prevent such stories by filming the police whenever you can. Get yourself up to speed on the do’s and don’t do’s of filming cops, check out our tech gear page and try to connect with other CopBlockers in your area. You could very well prevent the next police shooting.