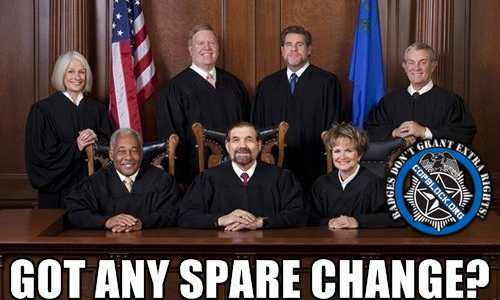 Back in March, Nevada Supreme Court Justice James Hardesty warned state legislators that the NV Supreme Court coffers were bare, due to a drop in revenue from traffic tickets. A decrease in the amount of tickets being issued by law enforcement state-wide had left the courts $700k over budget this year and facing another $700k shortage next year, for a $1.4 million total shortfall. In Nevada and other states, the state supreme court is funded by assessment fees added onto the fines for traffic citations.

Hardesty made sure lawmakers knew he wasn’t fooling around with an ominous threat to take everyone’s ball and go home if they didn’t find some way for taxpayers to pay up:

As you’ve probably noticed, it’s past May 1st and Nevada still has a functioning Supreme Court. That’s because the state legislature passed NV SB469, which provided $600k in “emergency” funds to hold them over for a little while longer. There are, of course, larger issues beyond an unpredictable budget that are created by the propensity for government agencies and courts to use traffic and other citations as a revenue generation source. The first and most obvious being that it creates a perverse incentive for lawmakers to pass laws based solely for that purpose and for police to enforce laws based on that priority. The reliance on drug seizure funds for local police departments, the huge growth in the War on (Some) Drugs, and the resulting human rights violations that have resulted are well documented at this point.

The less apparent and visible result involves the continued erosion of the premise that cops are here to “protect and serve.” Hardesty himself states that the budget crunch is a result of a change in priorities by police across the state. The Las Vegas Review Journal takes it a step further stating:

“the number of tickets written by law enforcement agencies around the state has been declining steadily, partly because state troopers have focused on violations more likely to lead to crashes…

Part of the reason, police said, is the NHP Strategic Plan’s emphasis on violations that could cause crashes, including distracted driving and driving under the influence. Police also believe enforcement and the Zero Fatalities education program have changed drivers’ behavior, while completion of some major highway projects has made traffic move better.”

When an emphasis on safety over revenue generation and a perceived improvement in driver’s behavior and road conditions is seen as a problem, then that’s actually a problem. Further, when the general population’s interaction with the police and courts trends increasingly toward negative and unnecessary harassment, it doesn’t help the already battered reputations of departments, such as the Las Vegas Metropolitan Police Department.

Recently, the entire Las Vegas Constable’s Office was dissolved with one of the bigger reasons behind that being the corruption caused by tying revenue to citations. The biggest scheme consisted of an assessment fee attached to tickets issued to people that didn’t change their car registration within 30 days of moving from another state. A 2012 modification in that law increasing the amount of fines and decreasing the amount of time allowed to change registration, which was itself passed explicitly to increase revenue, also allowed constables to collect a commission on the assessment fee.

The fact that those ticketed had to pay the assessment fee even if they were actually within the allotted 30 days, led to constables spending the majority of their days trolling through parking lots and apartment complexes looking for anyone with an out of state license plate. As you might imagine, it didn’t exactly endear them to new residents or others within the community. Nor did the unauthorized traffic stops that they began making to bring in even more cash. As already noted in a previous post, the Las Vegas Municipal Courts also recently came under fire for their “money hungry” ways. Among those criticisms was that the courts were putting revenue generation before safety by allowing people that were actually a threat and prone to violence to pay fees rather than go to jail. They also were accused of charging excessive fees to non-violent offenders with financial difficulties in order to keep them paying over long periods of time. (See the video below for an illustration of the loan-shark style scam that traffic tickets now represent.)

Not surprisingly, when you make the funding of government dependent on harassing and stealing from the citizens what you end up with is a government whose main function is to find new and worse ways to harass and steal from those citizens. The equally unsurprising aftereffect is to create a citizenry that sees government as nothing, but a den of thieves. When positive behavior is seen as a bad thing because it makes funding that government more difficult, then that assessment of them is pretty valid.