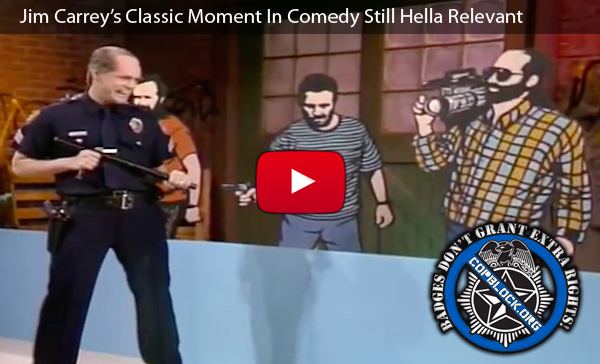 The video below is from the classic television comedy ‘In-Living Color’. The show was the launching pad for a number of actor comedians who later went on to have well respected and prolific careers both inside and out of comedy. It is best remembered as that brief period where Jim Carrey essentially played 100 different versions of the same character without anybody noticing or, at least, caring.

In the skit below Jim leads the cast in a well-rounded mockery of the worst police stereotypes, that all too often happen to be true. Of course police racism, brutality and general ineptness are satirized; but one I had forgotten about until a submitter sent us this video, was how much cops hate it when you film them.

Of course, when this show aired, it was far more difficult to film the police. If you were lucky enough to have a bulky camcorder and a blank vhs tape on you, and the battery was recently charged, and you could get it to stop flashing the date and time, you could have recorded very poor footage of the police when something actually went down in front of you. This was hardly ever the case.

We are extremely lucky that the police are not overseeing technological advancements, lest we would probably still be throwing sticks at rocks and trying to push a cart with triangular wheels. But since we do have such a wealth of technology, and because it has been ruled that we have the right to film police, we are far luckier than those pink-haired, flanneled neanderthals that roamed the earth in the early nineties.

Today quality cameras are portable, affordable and easy to use. Most people have sufficient equipment to film the police right on their phones. That technology also exists within a wealth of software and apps that are often free to users, and can make the hardware even more effective in creating and sharing police encounter videos. To top it all off, a worldwide network of activists now visibly exists that can spread the footage when police fuck up.

Always film the cops, because-
The Lens is mightier than the Badge!

…and they also still really fucking hate it when you do, which for some, is reason enough.