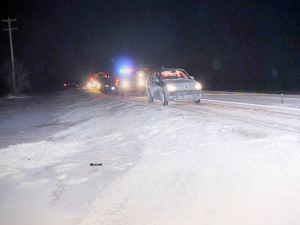 On February 28, 2015, in Grand Ledge, Michigan, Deven Lee Guillford, 17, was pulled over for flashing his high-beams at a police officer. When Sgt. Frost from Eaton County police department showed up to Deven’s car, he asked for “license, registration, and proof of insurance.” Deven clearly stated that he needed to see three forms of identification for his safety and the officer’s safety. The officer got defensive and refused. Deven then asked for his badge number; the officer continued to be defensive and said he did not have to do that. While the officer was standing aside his vehicle, Deven stated that he was going to call his girlfriend. He started to dial, and the officer suddenly ripped open his car door and tried to yank him out of the vehicle. Shortly after, it ended with a taser to the neck, and 7 shots: 1 to the head, 1 to the chest, 1 to the arm, 1 to the armpit, and so on.

What I see here is a young boy trying to take a step and possibly flex his rights for the first time. Sure, he wasn’t perfect at it, but he was learning and I give him an applaud for this. What a shame it had to end in a death of a young child. The officer could have avoided such a horrific situation like this if he just let this young boy flex his rights. Nobody, especially unarmed, deserves to die for the rights we have as Americans. Justice needs to be served.

UPDATE: The press conference was yesterday. Officer’s killing claimed justified; not charged, and still on the job.

[EDITORS NOTE]: This story was also covered by CopBlock.org contributor, Asa Joshson, on June 17th, 2015. The above post was published as it’s a personal perspective pieces on Deven Guillford’s wrongful death. From Asa’s post:

Eaton County Prosecutors in Michigan say they will not pursue charges against an officer that shocked an unarmed teenager with a stun gun, and then shot him seven times, including in the head, during a fatal traffic stop in February. Eaton County Sheriff’s Sgt. Jonathan Frost killed 17-year-old Deven Guilford after initiating a traffic stop when the boy flashed his bright lights at him and then stood up to such a ridiculous stop.