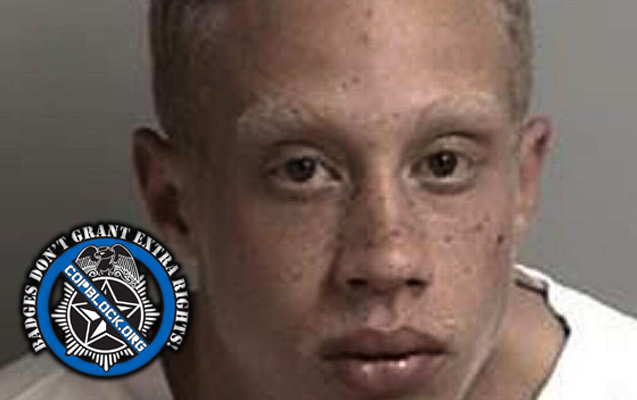 Earlier this week, on Monday, a South Lake Tahoe, California Police Officer killed an unarmed man at the Tahoe Hacienda Inn. The unnamed officer reported to the hotel to investigate after police had received a call of a woman screaming in her room.

Kris Jackson, 22, was with the woman in the room when police responded. When they arrived he was seen trying to crawl out of a window. At that point the officer claimed that he/she ‘percieved a deadly threat’ and opened fire on the young man, striking him. He later died in the hospital as a result of his injuries.

A timeline of the events appears to show that it all unfolded rather rapidly:

▪ 2:40:21 a.m. Call into dispatch received and the caller reports a female crying and screaming.

▪ 2:49:39 a.m. The involved officer reports on the radio that someone is going out the back window.

No weapon was ever found at the scene of the shooting. Further, it appears that he was shot while climbing out of a window, making it astronomically unlikely that he ever posed a threat to the officer or anyone else.

Whatever the officer perceived as a threat was likely a product of his own imagination. The claim that an officer ‘felt’ or ‘perceived’ a threat is becoming the most empty cliche in law enforcement rhetoric. Whether or not the officers feel or perceive a threat is not at all relevant if there is no supporting evidence to back that claim, especially when lives are at stake.

Either the subjective experience of criminal boogeymen is too much for cops to handle rationally, or claims to that effect have become a free pass to kill unarmed people. Either way, it is becoming an almost daily occurrence.

I have crawled in and out of my fair share of windows. The only threat it was ever possible to pose was to myself. I find it more likely that, because the suspect had a run-in with officers recently at the same location, police had taken a dislike to him and used the opportunity to blatantly kill someone who they did not like or were annoyed by.

To top it off, the woman screaming was his girlfriend, and she claims that the officer did not even issue a verbal warning to the man before fatally wounding him.

The family has retained a lawyer to help them investigate what they feel was excessive force that resulted in the death of Kris Jackson. Meanwhile, the officer is on the standard paid vacation, while his friends and colleagues ‘investigate’ any wrongdoing.

Even though it remains unlikely that the internal investigation will turn up any wrongdoing, or that Kris and his loved ones will receive justice for his killing, the South Tahoe Police were kind enough to offer the following statement as a consolation prize:

“We recognize family members and loved ones will understandably grieve and express distress regarding the loss of life — our condolences are expressed to those feeling such loss.”

Well, that pretty much makes up for the lack of training and/or disincentive-to-kill that the SLTPD department provided their badged killer with, right?