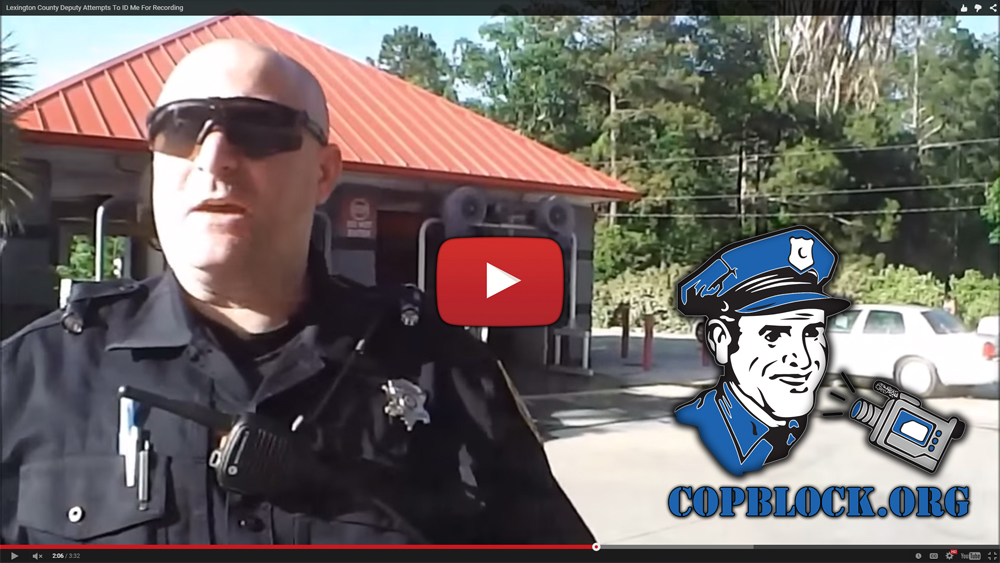 In a video uploaded by 803policevideos on May 31, 2014.  The cameraman was recording an active crime scene after police had arrived.  While filming, Deputy Thomas Smith approaches and asks if he had seen anything that had happened.  He replies that he arrived right after the officer arrived.  Thomas then walks away and returns shortly with his trusty pocket notebook in hand.

He then asks for the cameraman’s name.  He states to the deputy that he does not want to give his name.  Deputy Smith then tries to say that he has inserted himself into the investigation and is required by law to give his name.  The cameraman states to the deputy that South Carolina is not a “stop and identify” state.  Surprisingly, Smith acknowledges that he is correct, but then goes on repeating himself that he has inserted himself into the crime scene by recording.  The back and forth goes on for about a minute until Smith realizes that he is not going to be able to legally get his name and walks away.

Notice that the cameraman remained calm during the interaction and did not say anything that would escalate the situation.  He knew his rights and stood his ground in a respectful manner.  The deputy was pretty professional during the interaction besides the fact that he was not being truthful about the guy having to identify himself.  He never threatened him or raised his voice.  I give this deputy a thumbs up for acknowledging that the cameraman was correct when he stated that SC is not a stop and identify state.

Should you be approached by an officer while filming a scene, remain calm and answer as few questions as possible.  This gentleman is obviously comfortable  with interacting with police or he would have probably squashed the conversation by asking, “Am I being detained, or am I free to go?”

You may recall a video we shared with you in September of last year that I shot where it was a similar situation, but went a little differently.   This was my third Cop Block video and I made some mistakes; which I’m not afraid to admit to,  during my interaction with the deputy that tried to identify me by speaking way too much. Mistakes aside, what takes place in the video demonstrates the lack of knowledge that so many officers have about people’s rights and the law.  Both deputies were comic gold.  See that video here:  Ohio County Butt Hurt Deputies.

803policevideos did a nice job on their video and I look forward to seeing more from them in the future.