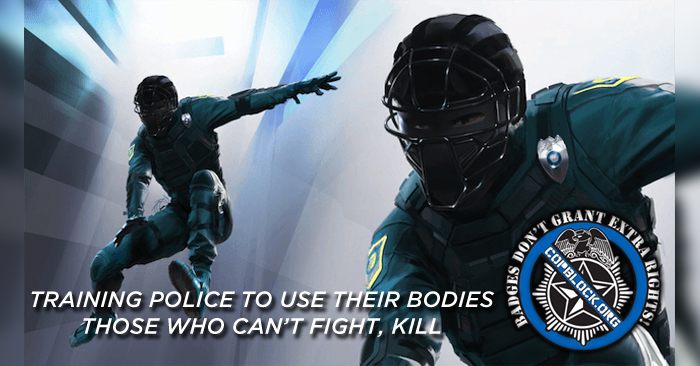 As the nation becomes more aware of all of the pepper-spraying, tasering and shooting that police compulsively turn to, often resulting in death or serious injury, many are beginning to wonder why cops can’t fight or otherwise physically deal with dangerous situations.

There was a time, it seemed, when police were willing to put their bodies on the line to keep the public safe. Those days, it seems, are gone. Now when we see police using fists and feet, it is often only to brutalize, usually in groups, rather than to prevent further violence.

Perhaps if our law enforcement were trained to use their bodies to escape, disarm, de-escalate and if necessary- kick some ass; they wouldn’t be shooting and killing as often as they are. Weapons should not be a first line of defense, but only a back-up when all other options have failed. Since there is not any specific training for officers to fight or practice physical prowess, it is little wonder they shoot first and makes justifications for it later.

It is not just police critics asking this question. Many police advocacy groups, like PoliceOne.com, are also suggesting that law enforcement officers participate in combat training to protect themselves and open up options for dealing with potentially dangerous situations. From their website:

“The martial arts don’t work on the streets.” I’ve heard this statement by many nationally-recognized defensive tactics trainers throughout my career. I have always found two things quite ironic each time the statement has been made. First, many trainers making such a statement had never worked the streets, and second, every empty-hand technique they taught could be found somewhere in the martial arts.

There remain many other benefits to be learned by police by partaking in martial arts training. Here are a few:

Besides martial arts and fighting skills, there remain other training options that could give police an advantage when it comes to strength, speed, mobility and agility. Foremost amongst those, and one you do not hear recommended much, is parkour. According to Wikipedia:

Parkour (French pronunciation: ​[paʁkuʁ]) is a training discipline using movement that developed from military obstacle course training. Practitioners aim to get from A to B in the most efficient way possible. This is done using only the human body and the surroundings for propulsion, with a focus on maintaining as much momentum as possible while still remaining safe. Parkour can include obstacle courses, running, climbing, swinging, mantling, vaulting, jumping, rolling, quadrupedal movement, and other, similar movements depending on what movement is deemed most suitable for the given situation. Parkour’s development from military training gives it some aspects of a non-combative martial art.

Here is an example of parkour in action, for those who have never witnessed this entrancing form of human athleticism.

How cool is that? Doesn’t it seem like police would appear far more like the gallant warriors they make themselves out to be, if they were able to act and move like action heroes, rather than just aiming a weapon at anything that moves?

The deadly force that comes from weapons usage is partially a consequence of limited options. Police who are only trained to spray, tase or shoot have little choice in how they deal with dangerous situations. And as a result of this over-reliance on guns, etc they do not have the confidence necessary to interact with civilians in ways that de-escalate or disarm situations before deadly force should ever be considered.

Perhaps of our police were spending more time in the dojo, gym or otherwise physically training to be badasses; they would be far less likely not just to kill people, but to interact with them with limited options. Limited options, in and of themselves, are almost always a recipe for disaster.