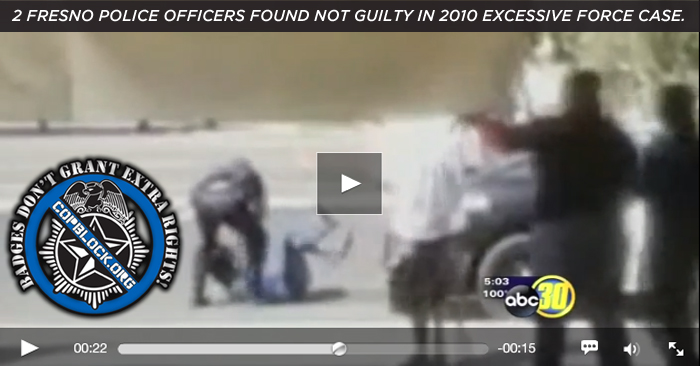 In 2010, two Fresno police officers were dispatched to disperse non paying customers at Big Mamas restaurant in Fresno CA. When they came across high school student Idalia Morgutia-Johnson a dispute over whether she had ordered anything ensued, and the situation escalated. The partial video of the incident shows one of the officers on top of Johnson, and later it appears that he is holding her by the neck and suspending her off the ground, while taking her towards a police cruiser.

Johnson was never charged with a crime.

In less than hour a jury had cleared the officers and the city of Fresno of any liability.

When 14 people can watch this and clear an individual of wrong doing, there is evidence of a society in decline. Either people are too afraid to stand up to the Gestapo, or they are too in love with the Gestapo to acknowledge that they are not protecting them, but are in fact the ones perpetuating the oppression by “Just doing their jobs”, and “Just following their orders”