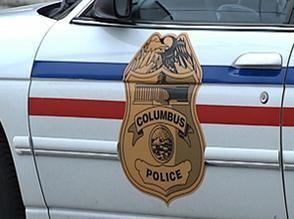 Yesterday, June 19, 2015 a Columbus OH officer, Jonathan Thomas, went to a home in Whitehall OH (a city within Columbus) to take a report about an incident involving a traffic incident that occurred in the city of Columbus.

This is how it went, as we currently know: CPD officer arrived at a home on Chandler Dr, Whitehall to take a report. The officer needed something out of his cruiser, while he went to his car the man needing to make a report went into his home. While in his home, the man heard a shot fired. He then ran outside and heard a woman, Andrea, screaming that the cop had just shot her toddler, Ava. According to his facebook post, the cop told the man that he thought the dog was attacking so he fired a round through the door of the home, accidentally hitting the child. The child did NOT die, the shot went through a leg. The CPD issued this statement on their facebook page: Apparently the screaming and sounds of distress coming from the house were due to a woman who had been badly cut, and the woman yelling wanted help for her. Did the cop yell back, like, “what’s wrong?” or “what’s happening in there?”, we don’t know but it doesn’t seem like it or he’d have probably known it wasn’t a dog attack. Shouldn’t any adult carrying a firearm around actually know what is happening before resorting to unholstering a gun and shooting at something? I think so. Especially one who is specifically trained for his or her profession to utilize a firearm.

Let’s look at Ohio law on this. The ORC states the following, note the absence of liability stated:

2923.161 Improperly discharging firearm at or into a habitation, in a school safety zone or with intent to cause harm or panic to persons in a school building or at a school function.
(A) No person, without privilege to do so, shall knowingly do any of the following:

(1) Discharge a firearm at or into an occupied structure that is a permanent or temporary habitation of any individual;

(2) Discharge a firearm at, in, or into a school safety zone;

(3) Discharge a firearm within one thousand feet of any school building or of the boundaries of any school premises, with the intent to do any of the following:

(a) Cause physical harm to another who is in the school, in the school building, or at a function or activity associated with the school;

(b) Cause panic or fear of physical harm to another who is in the school, in the school building, or at a function or activity associated with the school;

(c) Cause the evacuation of the school, the school building, or a function or activity associated with the school.

(B) This section does not apply to any officer, agent, or employee of this or any other state or the United States, or to any law enforcement officer, who discharges the firearm while acting within the scope of the officer’s, agent’s, or employee’s duties.

(D) As used in this section, “occupied structure” has the same meaning as in section 2909.01 of the Revised Code.

Obviously, it can be argued that hearing distress and calls for help is within the scope of the officer’s duties. But it’s pretty amazingly negligent, especially since he told the resident with which he had initial contact that he fired through a door.  Is it actually within the scope of his or her duties to shoot a gun through a door of a home just because someone is calling for help? Shouldn’t one have some kind of idea about what or who is behind the door before doing something like that? If I hear yelling, so I go shoot through a door and my bullet hits a toddler, what do you think would happen to me? I am guessing I’d go to prison for the above crime (because I’m not a cop) and also for some kind of felony assault, maybe I’d be charged with trespassing as well. What if I said, “But it was an accident!”, would they take it easy on me? I doubt it. I’d be taking a really long trip to our state’s women’s prison.

Since this happened yesterday, local media has already been all over it. I’m not even sure what to say. Another cop tried to shoot a dog. ANOTHER cop shot someone. Another cop shot a kid. Seriously? Chief Jacobs can be reached at (614) 645-4600, she is typically very proactive compared to other police chiefs in this country and I have often said, “ya know, she’s really not bad for a cop.” I hope Chief Jacobs handles this as we all probably want to see it handled, with stiff criminal charges, just like you or I would get if we did something so stupid.

Ava’s mother, Andrea, tagged me on facebook today to let me know she has started a petition for the firing of Jonathan Thomas. We at Columbus CopBlock have not been able to get any updated information from Columbus Police since shortly after the incident. As we understand, Thomas is still working his job like before. While this family lives with fear, anxiety, and a small child who has been shot.

This is not acceptable and completely out of order.

This irresponsible “peace officer” should have been fired and charged. They are still investigating, and I do hope they will arrive at the logical conclusion: That this reckless man SHOT A CHILD and should be fired go to jail. We’ll see…

In the meantime, here is what the text of the petition says:

Officer Jonathan Thomas has exhibited very poor decision making skills several times in his five year career as an officer of the law. The most recent and by far the worse, was the reckless shooting of Ava Ellis! Ava a four year old girl was shot at her house by Officer Thomas because a household pet startled him and his poor decision to shoot the pet caused Ava serious harm when the bullet hit her in the right upper leg, shattering the femur and causing long term medical problems for Ava. Officer Thomas should be fired as an officer for the safety of the citizens in Ohio. Officer Thomas should be fired so that we the citizens will know it is not OK for a man with a gun to shoot our kids in our house and walk away free!!!

If you would like to help the family urge Columbus Police to fire this “man” the petition is here, and if you need to copy and past for some reason, URL: https://www.change.org/p/chief-kim-jacobs-columbus-ohio-police-department-officer-jonathan-thomas-must-be-fired

Andrea, Ava’s mother, started a facebook page called Prayers For Ava. Please go to facebook and like that page to stay up to date on how Ava is doing and how her family is handling all this. I asked Andrea, Ava’s mom if she’d like to say anything for me to include in this update. She did want to provide you all a short statement in her own words.

Ava is currently going to school and she is still working on emotionally healing. Ava is enjoying school and making lots of friends. Ava has had to miss out on a lot because of her injury from officer Thomas and will have to miss out on more. Ava will have to go back for another surgery with in the next year.