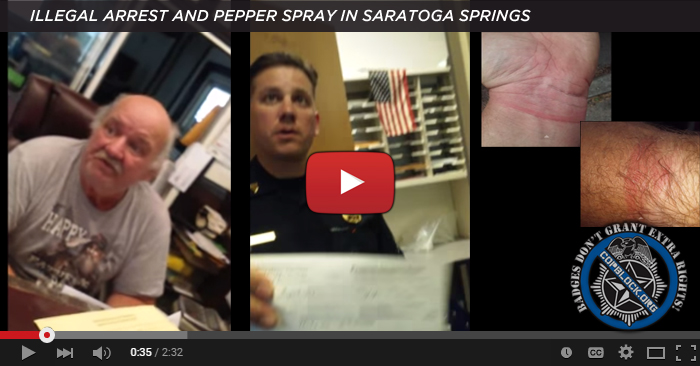 You all might recall a story that Ademo did about Capital District Cop Block Founder, Adam Rupeka, being illegally arrested and pepper sprayed for giving Saratoga Springs Police Officer Nathan Baker the bird on May 16, 2015.  New video has been uploaded to YouTube that demonstrates just how badly Adam’s rights were violated.

In the first part of the video you will hear audio excerpts of what took place at the police station.  Officer Baker never turned off the camera and had it with him while threatening Adam with more pepper spray and being tased even though he is in handcuffs.  Baker then goes on to deny medical treatment to Adam until he essentially bows down and respects his authority.

The video continues by showing the red marks left on Adam’s wrists two hours after the cuffs were removed.  Then there is more audio where Baker is speaking with a sergeant about what charges they can come up with to make it stick.  The camera was in a bag which caused the audio to be quite muffled.  Towards the end of the audio clip you can hear Baker say, “Well he says he going to sue the shit out of me I believe was his exact term.” Adam then has trouble getting his car back as the tow company says that they will not accept credit cards for police tows.  He has to go to an ATM to pay cash to get his car back.  This business practice wreaks of police kick backs.  Their refusal to take a credit card payment may also be a violation of terms with the bank that handles their credit card transactions.  There are very strict policies in place for a company to have be able to use credit card machines for transactions.  The New York State Attorney General should find the business practices of this tow company quite interesting.  His total cost for the tow was $153.75 even though he had stopped his car in a parking spot and there was no need for the police to have his car towed.

The next video clips shows what transpired when he went to the Saratoga Police Dept. to file a formal complaint against Officer Baker.  The sgt. that gives Adam the complaint form is seen wearing a body camera during the exchange.  Mr. Rupeka asks about his property that was taken by Baker and he is told that it is being held as evidence.  Adam decides to add a complaint against the sergeant  as he is refusing to return his property, which is being illegally held.  During the interaction you hear the officer say several times that he is not going to give him a second complaint form for Adam to fill out on him.  The smugness of this officer shows how above the law these officers really think they are.  In the end, it took four days for Adam to get his property back from the police department.

Mr. Rupeka was subjected to a serious case of police brutality at the hands of Officer Baker all because he got offended by a middle finger.  One can only imagine how badly real criminals have been treated by Baker.  I would be interested to see how many brutality complaints have been brought up against this thug in uniform.

After all was said and done, the charges were dropped against Adam in the “interest of justice.”  He has retained an attorney and is currently in the process of a civil lawsuit against this officer.

With case-law supporting Adam Rupeka’s rights protected by the First Amendment we are hopeful that a reasonable jury will find in favor for Adam.  He violated no laws by his actions and did not deserve the abuse that he was subjected to.

An interesting side note to this story is that a supporter (his wife) of Officer Nathan Baker tried to start a GoFundMe campaign to raise money for the officer’s legal expenses.  That account was reported multiple times and GoFundMe has rejected that campaign so it was removed from their site.  Cop Block will bring you updates to this continuing story as they become available.