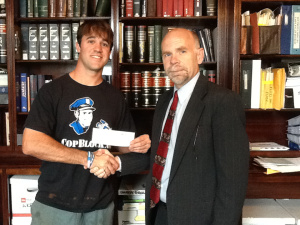 This article was written by Nathan Cox and originally published at VirginiaCopBlock.org. In March of 2014, local Richmond media (along with Virginia Cop Block) reported that I was being sued by Virginia State Trooper Melanie McKenney as a result from a traffic stop that transpired on Memorial Day weekend 2012, nearly two years prior, in which I later wrote an article about. The initial suit was for “defamation” which was filed in small claims court and she was suing me for $5,000.

The initial “warrant in-debt” I received had no attached complaint or allegations and I had no idea what it was about. I later formed the opinion that McKenney was upset about something I perhaps wrote in the article about the stop. The article also included information I acquired by way of a Freedom of Information Act Request.  This information I received included electronic forms of communication, radio transmissions and her dashboard camera.

During this first go around, I was contacted by the Judge Judy show who wanted this case on their show and I’m under the impression they spoke with Melanie McKenney. I declined the invitation to be on the show. Melanie McKenney did not show up for her first hearing, claiming in a letter written to the Judge (in which I received a copy of), that she thought her court date was in the afternoon. So she appealed the judgement which bumped the case up to Circuit Court.

A few weeks away from the trial date that she requested, my attorney received noticed that McKenney voluntarily non-suited the case – case dismissed. NOW, a little more than six months down the road, just yesterday while I was at work, I received another notice about a new law suit. She’s still suing me for “defamation” and also now “…respectfully requests that the court grant her compensatory damages against the defendant in the amount of $1 Million Dollars AND punitive damages in the amount of $350,000 and pre-judgement interest plus all other such relief as proper and warranted by the Court.”

I have re-hired a hands-down excellent civil rights, Constitutional attorney based out of Richmond named Thomas Roberts (and Associates). This will be the third 1st Amendment related case that Mr. Roberts (and his associates, who are EXCELLENT) has represented me on. The first case was when I was illegally pulled over by a VCU police officer. Tom Roberts won that case and VCU Settled out of court for $10,000.

In November 2012, I was served an Injunction by the Richmond Police for simply LINKING to some leaked documents that someone had uploaded online. Tom Roberts again handled that case along with his associate Andrew Bodoh who told the Richmond Times Dispatch,“The judge’s injunction has led to these documents being taken out of the public domain,” said Andrew Bodoh, an attorney for Karn and Cox. He added: “Seeing that the documents have been taken down, it raises concerns that the injunction is chilling our clients’ right to free speech and the public’s right to free speech.”

Virginia Cop Block has done GREAT work since being launched. Our mission is simple, to hold public servants accountable and to bring about more transparency within the worlds of law enforcement and the judicial system. The organization is decentralized. We’re reactive and proactive. Equally important to our mission is the matter of education. Empowering individuals through education. Talking to people one on one and in group setting about their natural and civil rights. How to and how not to interact with the police. We are NOT a police hating organization. I do not promote or support that type of behavior towards the police or anyone. As Maya Angelou once said, “Hate, it has caused a lot of problems in the world, but has not solved one yet.” Also, Martin Luther King Jr. once said, “Darkness cannot drive out darkness; only light can do that. Hate cannot drive out hate; only love can do that.”

I once wanted to become a police officer which is half the reason why I joined the Army in 2006. I decided against it after I realized how out of control the Police-State had become. The police have become militarized and have completely morphed into something different than many years ago. It appears that most police do not take their Oaths to the Constitution seriously and that they have no problem undermining and depriving people of their Constitutional rights. Additionally, statements by police officers such as the one in this image GREATLY concern me. 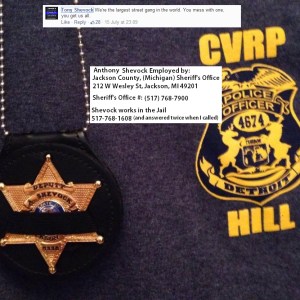 There is nothing wrong with holding individuals accountable for their actions, most especially public servants. In fact, it is our duty to do so. Anything less means giving tacit approval and consent of their misdeeds. However, we see here, doing so can put a target on your back for retaliation.

I am now in a legal battle with this woman and I need YOUR HELP AND SUPPORT to fund this battle and my legal fees.

Tom Roberts plans to counter-sue. In order to move this case forward I need the financial support of the public. It is of my opinion that this is a 1st Amendment Rights issue and I suppose a judge/ jury will decide that. In saying that, help me protect my first amendment rights and perhaps, although it’s not clear, this case could help set a precedent in protecting YOUR first amendment rights in the process.

You can view the 11 page lawsuit & make your donation —> HERE. No donation is too little or too small!