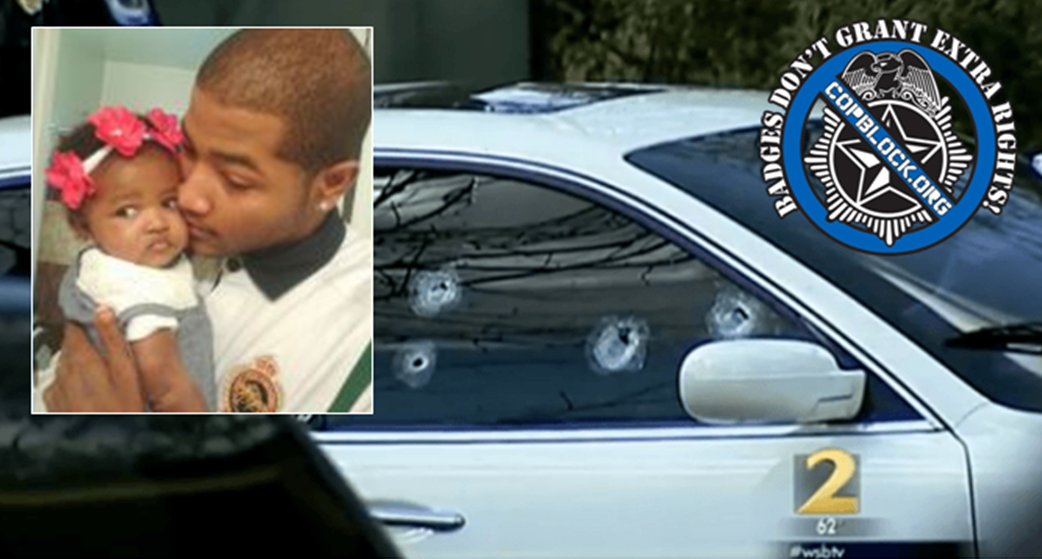 A metro-Atlanta medical examiner’s report is casting doubt on police claims regarding a fatal shooting earlier this year.

Smyrna police Sgt. Kenneth Owens shot and killed 23-year-old Nicholas Thomas at the wheel of a customer’s Maserati outside the Goodyear Tire store he worked at, on March 24.

Investigators said Cob County and Smyrna police went to Goodyear Tire to serve an arrest warrant on Thomas for a probation violation. The shooting happened in a parking lot near Cumberland Parkway and Paces Ferry Road.

Police say Thomas saw them as they were approaching his place of work and tried to flee.

Owens claimed he feared for his life when Thomas jumped in a car, tried to get away, and drove at officers in the white Maserati.

That’s not what witnesses said at the time however.

“They were standing behind the car, opening fire. He wasn’t driving towards them,” Goodyear customer Brittany Eustache said, who watched the shooting from inside the store, just feet away. “The car was not moving when they begin to shoot at him. The car had been stopped he hit a curb, he could not go any further.”

When asked by local reporters if Thomas made any aggressive moves, the woman replied, “None, none at all. They immediately opened fire on [him.]”

Now, the release of a medical examiners report this week, may shed some light on the situation.

The autopsy says Thomas died from a single gunshot wound after a bullet entered his upper back on the right side. The bullet hit his lungs and aorta before coming to rest in his upper chest on the left side.

This completely refutes police claims that Thomas was driving towards them. The report lists cause of death as “homicide.”

Mawuli Davis, a lawyer for Thomas’ family said the fact that Thomas was shot in the back “reinforces the position we have taken that he was not a threat to the officers.”

The Georgia Bureau of Investigation has completed an investigation of the incident. The Cobb County District Attorney’s Office says the investigative files are under review and prosecutors plan to present the case to a grand jury next month.

Investigators say video of events surrounding the shooting were recorded but not of the shooting itself. That footage has not been released, not even to Thomas’ family.

“He was trying to get away from the cops,” Thomas’ mother said. “He got in that Maserati right there and they shot him down dead!”

Sgt. Owens was placed on administrative leave following the shooting, but has since returned to desk duty.

Police have defended his actions.

“When you go to serve a suspect who knows that he is wanted he is unpredictable and we have to react based on his actions, that’s what we did,” Smyrna Sgt. Ed Cason said.