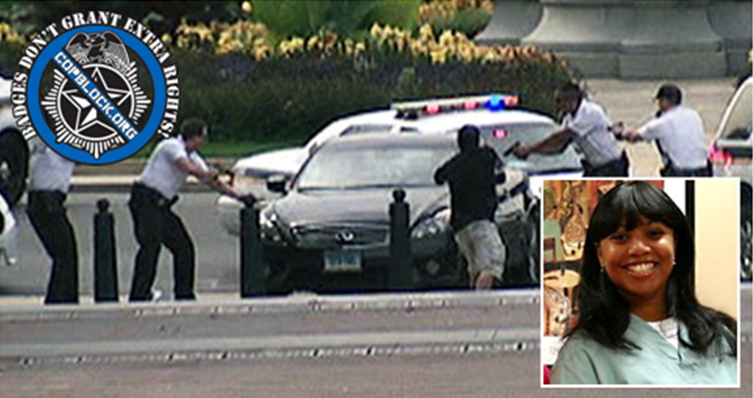 Carey was the single mother and dental hygienist from Stamford, Connecticut who drove to Washington, D.C., with her infant daughter on Oct. 3, 2013, before mistakenly driving up to a White House guard gate and making a U-turn.

She was immediately pursued by uniformed Secret Service and Capitol Police officers who shot her dead about two blocks away from the Capitol.

Media talking heads immediately went into a frenzy lambasting Carey as a vicious and armed potential terrorist who had meant to do harm to our dear leaders.

The truth of the matter however, is that over aggressive police unloaded at the car of an innocent mother in front of her toddler for turning around at a White House checkpoint, refusing to stop, and aimlessly driving around a round-about.

It was confirmed that Carey was unarmed but that didn’t stop D.C. pundits from wringing their hands about what heroes police were and how much courage it took to for them to ‘successfully’ handle the situation – breathlessly stating that president Obama was only miles away.

The incident lasted only seven minutes, from 2:13 to 2:20 p.m., but it caused a virtual lock-down of Capitol-area government buildings for the day. During that period, Carey engaged with officers at three locations – once at the White House and two near the Capitol.

The Justice Department had claimed Carey refused to stop at the direction of two uniformed Secret Service officers, before an off-duty officer placed a metal bike rack in her path to block her exit.

Officials claimed Carey then struck the bike rack and the off-duty officer who was standing behind it, knocking both of them to the ground. An eyewitness however, contradicted that story.

That witness, a woman who apparently was working at the nearby Supreme Court, told police, as Carey’s “vehicle was backing up and before it struck the police booth, there were no police officers near the vehicle.”

Police had also initially claimed that Carey had wrecked into a police cruiser causing damage and harm to the officers inside. It was latter quietly admitted however, that the driving officer wrecked the vehicle himself and sustained “airbag injuries.”

The third claim officers made, which is corroborated by footage recorded from the scene, was that Carey struck a vehicle while pulling away from permanently-affixed black barriers that block vehicular traffic on the pedestrian walkway that leads to the steps of the Capitol.

Footage filmed by a bystander does appear to show Carey strike a cruiser before pulling out and fleeing officers – but after Carey already begins down the road, the footage shows officers open fire at her from behind the vehicle.

A media spin campaign was immediately launched against the woman. Officials claimed Carey was suffering from post-postpartum depression and delusions, and believed that president Obama was stalking her, secretly videotaping her, and had her residence bugged.

Conspiracy theories that Carey may have had an actual romantic relationship with the president aside, the recent revelation that police had prior knowledge of the infants presence in the car before firing on it, are unsettling enough.

A former member of the Secret Service Uniformed Division says he heard a radio transmission while on duty and in the officers’ locker room, inform officers there was a child in Carey’s car prior to shooting.

If true, this would mean another serious policy violation for officers involved in the incident. Under the heading “General Policy” in the U.S. Secret Service Operational Procedures guidelines on “Vehicular Pursuits,” it states:

Whenever it becomes evident that injury to citizens or members of the Force, or unnecessary property damage may result from a vehicular pursuit, that pursuit shall be immediately discontinued. Safety is the first priority, not arrest.

“Certainly, since the officers had no authority to pursue them, they cannot establish authority to use deadly physical force against Miriam or her minor child,” Carey family Attorney Eric Sanders said.

Also, it was previously reported that at least one officer immediately knew there was a child in Carey’s car, and had got on the police radio as soon as she left the White House guard post.

A statement made by that officer said:

As [Carey] got to the next set of barracks she made a U-turn and came back towards us. At this time she came to a stop or slowed down to an almost stop, I tried to open the front driver’s door but it was locked. I noticed that there was a baby in the car.

This statement alone indicates that most officers should have known they were shooting at a car with an infant child inside.

Carey was struck five times from bullets fired from behind her car, through the rear window, with the child strapped into a car seat in the back. 18 total shots were fired by two officers from U.S. Capitol Police and two from the Secret Service Uniformed Division.

The U.S. Attorney’s Office said last year that there was “insufficient evidence” to pursue federal or local charges against any of the officers involved in the incident.

A $75 million wrongful death lawsuit has been filed against the Secret Service and Capitol Police by Carey’s family. Following the incident, an ugly custody battle ensued over Carey’s one-year-old daughter but the family has now retained custody from the government.

For more on the complete unraveling of the official narrative, the ensuing coverup and the tragic story of Miriam Carey, checkout this five part series from World Net Daily.