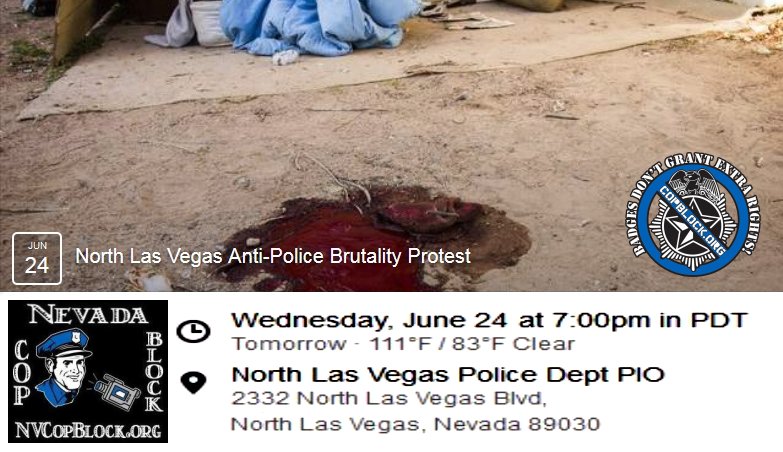 As was noted in a previous post, it was just announced by Clark County D.A. Steve Wolfson that yet another Las Vegas area cop won’t be facing any sort of accountability for killing an unarmed person under highly questionable circumstances. Of course, that and the shoddy “investigation” that preceded the announcement aren’t that unusual here in Vegas, where not one single cop has ever stood trial for shooting someone. However, the reason is a new twist. Wolfson actually stated that the reason this murder couldn’t be considered criminal was that the only (living) witness is the shooter, North Las Vegas Police Officer Raymond Lopez.

In March of last year, Lopez saw a homeless man near an abandoned house. He approached that man and less than a minute later David Robinson was dead with three gunshots to the head and another in his shoulder. Although, Robinson was unarmed and a knife he did have was found still in his pocket, Lopez used the excuse that he thought he saw something glimmering in Robinson’s hand to justify the shooting.

Obviously, in a city where a cop can say he thought a hat was a gun to justify shooting someone and not be punished in any way, let alone charged with a crime, that was enough for the police “investigators.” An outside research group was brought in to access that investigation and they stated that the interviews conducted were incomplete and that Lopez should be re-interviewed. However, he was allowed to resign and refused any further interviews.

The idea that there isn’t other evidence beyond eyewitness accounts is ridiculous and the history of incomplete and uninspired “investigations” by Las Vegas area police and the Clark County District Attorney’s office, has created an atmosphere where cops know they can get away with murder and ensures there is no deterrent from them doing so. It’s not a coincidence that Las Vegas ranked no. 3 in the entire nation for police shootings.

Homeless people in particular are frequently bullied by and seen as targets for harassment and violence by the police. In fact, back in the 90’s the LVMPD’s Ofc. Greg Pease killed 3 homeless men in almost identical circumstances to Lopez’ case. In spite of three separate incredibly questionable incidents, he was never held accountable in any way whatsoever.

It’s these sort of sham investigations that let cops know they can do whatever they want, up to and including killing you, and get away with it every time. At some point people need to tell them we won’t just accept that anymore.