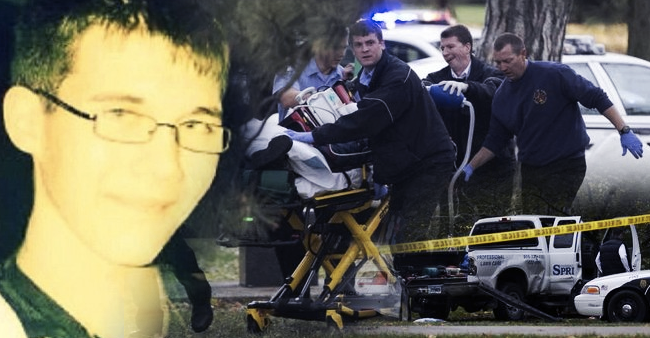 This post was originally published at CounterCurrentNews.com on June 21, 2o15.

James Comstock just wanted to let his son know that taking his truck without asking was serious business. He wanted to give his son a good “scare” so he called the police, to ask them to talk some sense into him, and let him know that he could get in real trouble for doing something like that. “He took off with my truck. I call the police, and they kill him. It was over a damn pack of cigarettes. I wouldn’t buy him none, and I lose my son for that,” Comstock said.

That “damn pack of cigarettes” led to 19-year-old Tyler taking his dad’s truck and running off. James knew his son needed to understand that there are consequences to one’s actions. He figured the police would help him teach his son a “lesson.” But teaching Tyler a “lesson” ended up with the teen being shot dead on the nearby Iowa State University campus. Now, Tyler’s family wants to know why the police were so quick to fire on an unarmed teenager?

James said that the truck belonged to a lawn care company that he works for. He couldn’t just have his son running off with that vehicle, as it could get him in trouble. He explained all of this to the 911 dispatcher, letting them know that Tyler hadn’t “stolen” the vehicle in a traditional sense, but he needed to understand that he could not “borrow” the vehicle without permission. The truck came to a stop when officers pulled him over. He was never driving the vehicle towards them. In fact, the officers never even tried to make such a claim. Instead, they admit that they opened fire when Tyler failed to turn off the vehicle.

Officer McPherson fired six rounds hitting the teen through the glass, according to the Iowa state medical examiner. James reaffirmed to The Des Moines Register that he told the dispatcher his son was definitely unarmed. Tyler’s step-grandfather, Gary Shepley, 65, insists that “hard tough questions” have to be asked by the community now, regarding the police use of force, especially against teenagers and those who they can clearly tell are unarmed. “So he didn’t shut the damn truck off, so let’s fire six rounds at him? We’re confused, and we don’t understand. They’re professionals. They’re trained to handle these situations. And if they panic before they even know what’s going on, then ask yourself: What if it was your child?” he asked.

Was this a legitimate police use of force? Let us know what you think!