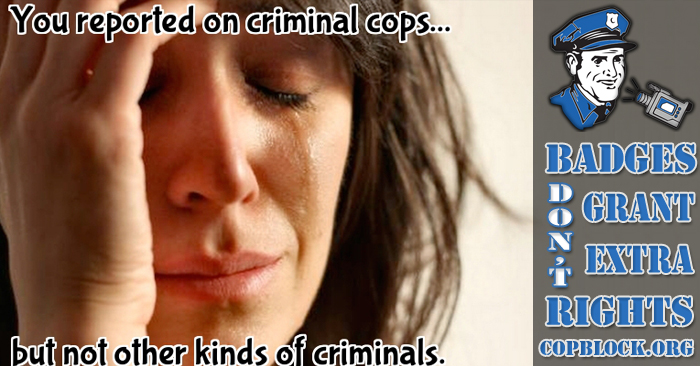 “Why Don’t You Ever Report On the Criminals?”

This is another one of those questions we receive or find some variation of in our comments quite often. The person asking generally wonders why we do not do general crime reporting or why we don’t mention every incidence of justified use of force or why we aren’t covering tragic and criminally violent attacks against law enforcement officers.

The most obvious reason is right there in the name of the website. Our mission is to spread the word that “Badges Don’t Grant Extra Rights” and to “Film the Police.”

Asking us why we don’t write about that other stuff is akin to asking a the publishers of a cookbook why they don’t report on farming techniques. Farming is an integral part of the larger story about food, but it doesn’t belong in a cookbook. Just as crime is a piece in the bigger picture of law enforcement issues, but doesn’t belong on a site dedicated to police accountability.

It is not that we are sympathetic to violent offenders or thieves. We advocate for non-aggression in all avenues of society. Those who commit crimes against individuals or their property should have to answer for those acts. We just don’t believe that police are always responding or reacting to innocent or criminal individuals in the most humane and/or productive ways.

Every local paper in the country reports on criminal activity. Many of these stories, if tragic, terrifying or entertaining enough, often end up in larger outlets in the mainstream media or the thousands of websites dedicated to reporting on such things. It is not as though the ‘bad guys’ never get their names and activities smeared by the press. It happens all of the time.

In fact, police blotters list people arrested for crimes, but rarely report on whether or not those accused were actually found guilty of the crime. Many times, these listings are enough to do damage to a persons reputation, and these little blips may be used against them by potential romantic interests, employers, creditors and landlords, among others. The presumption of innocence is often superseded by the way most media reports on crime.

Yet our detractors would have themselves and everyone else believe that CopBlock.org is alone in failing to paint the entire picture. The accusations of unfairness and bias could just as easily be made of any journalism outlet anywhere. Yet unlike most of those media entities, we are fully open about our biases.

We are absolutely in opposition to the sort of aggressive, unaccountable, revenue-collecting, elitist-protecting police paradigms that have come to take hold of much of our nation. It is our goal to help end these archaic and often barbaric practices and encourage communities to seek new ways of dealing with local issues and crime outside of them.

So although our practices may not always be consistent with the expectations of the people who ask us why we don’t report on the ‘bad guys’, they are consistent with our stated mission and goals.

Recently voices like ours have risen throughout alternative media. The atrocities committed by the police state are even beginning to make mainstream news headlines. For too long, these things were being ignored or hushed up. A new era in reporting is making it nearly impossible for police to cover-up their mistakes, accidents or outright crimes.

We are proud to have been at the vanguard of this movement and elated to see others follow. It is also refreshing to see that some officers in these high profile cases are being held accountable for their violent illegal actions. Equal application of the law is only possible with transparency and openness.

So you will forgive us if we have been so busy reporting on criminal cops that we didn’t have time or space leftover for criminals with no expectations of high character and good decision making or who do not earn publicly funded salaries. Which makes us wonder…

If you are so concerned about crimes, why doesn’t it bother you as
much that so many law enforcement officers are committing
them and getting away with it??

[Note: CopBlock.org is a decentralized organization. The article above is the opinion of the author. The inclusion of ‘us’ or ‘we’ is merely a semantic device to indicate the authors perception of the organization overall goals. Yet it is not the official opinion of all who are part of the CopBlock organization as a whole.]