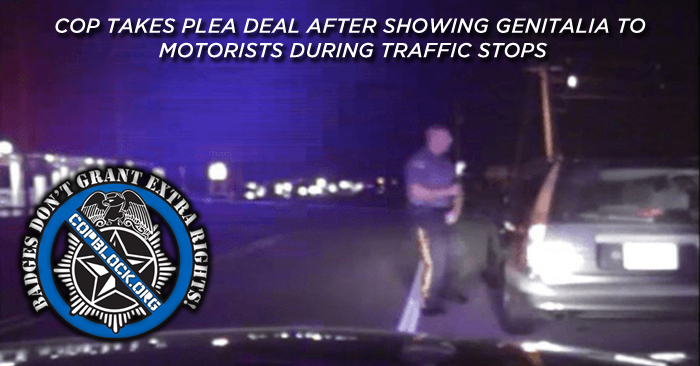 (NEWTON, NJ) The Newton Police Officer who was arrested late last year after being accused of showing his penis to several young male drivers during traffic stops has just accepted a plea deal that allows him to resign from the Newton Police Department instead of being terminated.

Jason Miller, 37, appeared before Judge Thomas Critchley in Sussex County Superior Court Monday with his attorney, Anthony Iacullo, for the first time since being arrested in November 2014.

Under the terms of the agreement, Miller pleaded guilty to turning off the video and audio components of his patrol car’s dashboard camera system “to conceal unprofessional and inappropriate conduct” between March 1, 2014 and Oct. 23, 2014.

Additionally, Miller, who is currently suspended indefinitely without pay from the Newton Police Department, will be barred from seeking employment as a law enforcement officer in New Jersey, Sussex County First Assistant Prosecutor Greg Mueller said.

The state is also seeking that Miller serve 60 days in county jail, as well as be subject to a probationary period of between one and five years, Mueller said. Several former county prosecutors are saying that the punishment is more than fair. “Whenever a public official is charged with something, the knee-jerk reaction in the public mind is that they are getting off but the officer is not getting a break here,” Robert Bianchi stated.

Bianchi continued, “It’s a balanced agreement that strikes the middle — recognizing that he’s a cop and there needs to be a harsher punishment to deter conduct, but also recognizing that it doesn’t need to be excessively vitriolic and hateful.”

Last year after the accusations arose, the Newton Police Department took statements from multiple drivers the officer had stopped, including one who was stopped twice in the same night by Miller. In one of the stops, according to the affidavit, officer Miller had his zipper open and his genitals exposed as he asked a young man several times where he lived and where he was going, making the young man feel “uncomfortable.”

Since exposing oneself is not necessarily considered a sex crime unless there are children present, it does not require that Miller register as a sex offender.