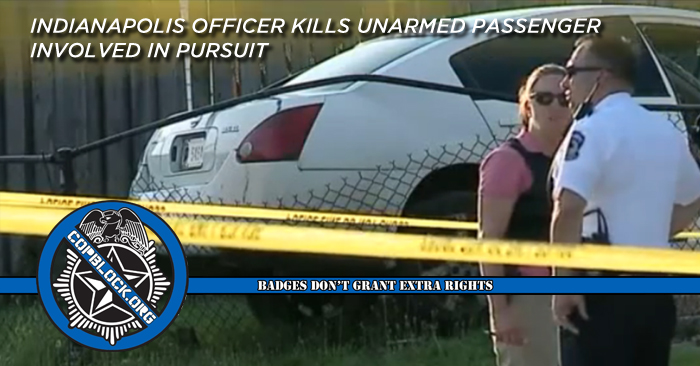 An Indianapolis Metropolitan police officer shot and killed the passenger of a car involved in a police pursuit Tuesday.

34-year-old Huntington resident Joshua Dyer died when the short chase ended in the 3800 block of Tacoma Avenue, after an officer initiated an investigation on a car that was illegally parked in Washington Park, near East 34th and North Dearborn streets around 6:30 p.m.

Police say the officer approached the white 2007 Nissan Maxima, and started questioning the two men inside before they became uncooperative and took off at a low rate of speed.

The officer followed in pursuit until the car crashed into two fences and ended up in a persons back yard north of 38th street near the Church of the Living God Temple #18.

Responding officers who had joined in the chase then drew their weapons before driver, 41-year-old Mathew Cole, exited the vehicle, jumped back in, and put the car in reverse.

Police say Cole began backing up toward three officers, and fearing for their lives, one officer opened fire on the car and killed passenger Dyer.

Some of the incident was partially captured on a cell-phone camera by a bystander.

“They’re about to shoot him!” the witness can be heard screaming before a gunshot rings out.

“The car run up on a curb, crashed, and I heard a gun shot,” the witness said. “It’s senseless and  crazy– just to see a dead body on the back of those peoples’ houses.”

It is not yet clear why Cole attempted to elude officers. He was arrested on the charge of resisting arrest. Dyer was unresponsive and declared dead at the scene.

The unidentified officer who fired the fatal shot has been put on paid administrative leave, police say, and an internal investigation has been launched to review the incident.

Police have not claimed that any weapons were recovered from the scene.

No officers were injured.