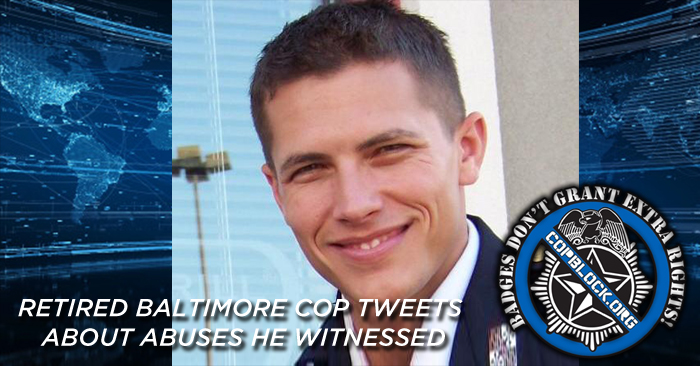 This morning (June 24th), Michael A. Wood Jr., a retired Baltimore police detective, began sending out a series of tweets about abuse he had “seen & participated in, in policing that is corrupt, intentional or not.”

Below are those tweets:

So here we go. I’m going to start Tweeting the things I’ve seen & participated in, in policing that is corrupt, intentional or not.

A detective slapping a completely innocent female in the face for bumping into him, coming out of a corner chicken store. — Michael A. Wood Jr. (@MichaelAWoodJr) June 24, 2015

Punting a handcuffed, face down, suspect in the face, after a foot chase. My handcuffs, not my boot or suspect

CCTV cameras turning as soon as a suspect is close to caught. — Michael A. Wood Jr. (@MichaelAWoodJr) June 24, 2015

Pissing and shitting inside suspects homes during raids, on their beds and clothes.

Swearing in court and PC docs that suspect dropped CDS during unbroken visual pursuit when neither was true. — Michael A. Wood Jr. (@MichaelAWoodJr) June 24, 2015

Having other people write PC statements, who were never there because they could twist it into legality. — Michael A. Wood Jr. (@MichaelAWoodJr) June 24, 2015

Summonsing officers who weren’t there so they could collect the overtime.

According to Salon.com, this isn’t the first time Wood has made some sort of admission about abuse by police:

Wood previously alluded to much of the misconduct he claims to have witnessed during a May 2015 interview on the podcast Dogma Debate with David Smalley. During that interview, Wood called for an end to the war on drugs and cited a lack of empathy as one of the main drivers of police misconduct. On the face of it, none of these admissions are exactly a revelation (which is kind of a statement in itself) if you’ve been paying attention to police abuse issues and the lack of accountability for them. There are some interesting details within them that connect to and tend to confirm (or be confirmed by) some previous known practices within other departments. Not too long ago, a Philadelphia cop admitted to planting drugs, falsifying paperwork, and lying under oath in testimony against other cops accused of stealing and doing all those other things that he did. In Houston, a group of police officers were caught writing bogus tickets in order to earn overtime by testifying in court. Also, in a high profile case of police brutality from Denver, the operator of the CCTV cam that provided the footage of an officer attacking a young man, who was in no way threatening or being aggressive toward him or anyone else, begins to pan away from the scene as soon as the beating starts, to try and prevent capturing evidence of it.

Wood’s admissions and the timing of them are a bit telling about the culture of police departments. It’s somewhat of a better late than never scenario, but the fact that he stood by and witnessed all of these (and probably many more) abuses and didn’t report them or take steps to stop them shows the level of complicity among law enforcement. This is something else I’m actually not personally surprised by. I’ve had a number of Las Vegas police answer with some variation of “are you going to pay my bills if I do,” when questioned about not reporting bad cops. The implication that they would get fired for speaking up after witnessing abuse or corruption shows who really controls police departments. The bad apples have already spoiled the bunch.

However, the idea that you should stand by and witness or cover up and even participate in abuses for monetary reasons doesn’t speak much for your own morality or how much of a good cop you actually are. Woods and others who “come clean” after their days as a cop are over should be commended for that act and the light that it shines on the corruption and police brutality out there. It would be much more beneficial if those standing there right this moment witnessing an abuse would take a stand here and now, though. If we’re really to believe that the bad ones are just a tiny minority of the police force, then the good shouldn’t have to worry about retaliation, since there’s so many more of them.

BTW, it didn’t take long for the parade of “Good Cop” supporters to show up and let Wood know how much they approved of his honesty and willingness to expose bad cops:

@MichaelAWoodJr Dude! What’s wrong with you? Are you still a cop? “Not for long” I bet if you are. And what’s your point? Guilt?

@MichaelAWoodJr@MarilynMosbyEsq Marilyn, you need to investigate this guy, he part of the problem

You gotta love those Cop Lovers with their eternal quest for truth and justice.