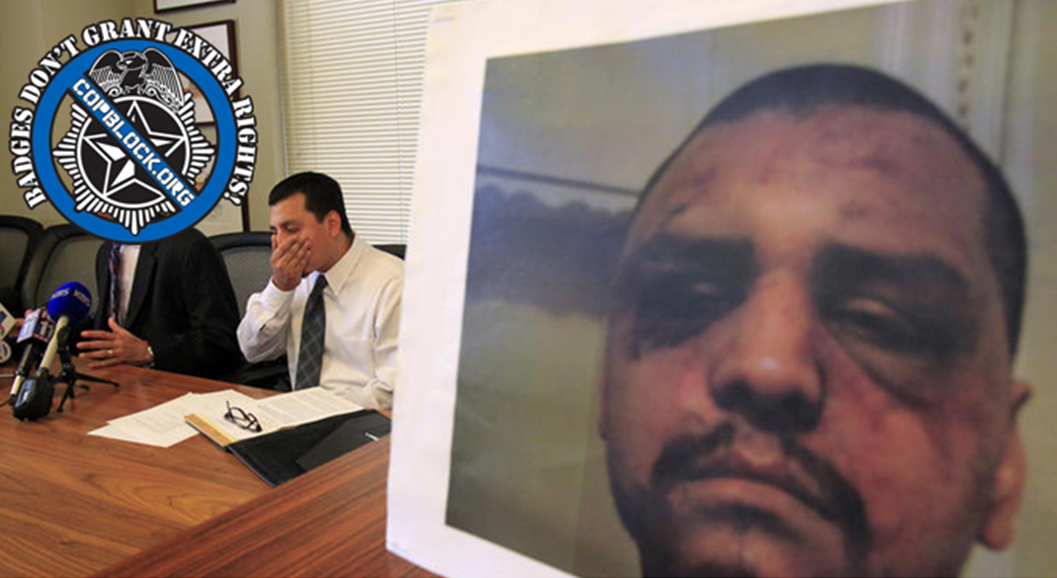 Three weeks ago, two Los Angeles County Deputies broke what they called a “code of silence” and signed plea agreements implicating other officers in a jail beating ring that had been targeting visitors of inmates.

Federal officials launched an investigation in 2010 after allegations surfaced that the deputies beat visitors to the Los Angeles county jail in a windowless, secluded room and then wrote false reports claiming the victims had instigated violence.

Deputies Noel Womack and Pantamitr Zunggeemoge reached a deal earlier this month regarding the primary case in question, which involved a man visiting his jailed brother in 2011.

Now, three deputies exposed by the two officers were convicted Wednesday, after a federal jury deliberated for only four hours, returning guilty verdicts against Deputies Sussie Ayala and Fernando Luviano and former Sgt. Eric Gonzalez, who bragged about the attack and beating of 27-year-old Gabriel Carillo in a text message.

At the time, the officers had claimed Carillo had fought with them in a waiting area and had to be restrained. The five deputies involved in the struggle denied the man’s allegations that he had been handcuffed and beaten without cause.

That was until Deputy Womack ended years of denial by admitting officers did in fact brutalize Carillo, who was handcuffed and held to the floor in a room at the sheriff’s department’s main jail facility.

Carrillo was attacked on Feb. 26, 2011, after deputies found him carrying a cellphone in the waiting area, a violation of jail rules – a civil-rights lawsuit filed by the man said.

After discovering the cellphone, deputies said they handcuffed Carrillo and escorted him to a booking room.

The officers claimed that when they released one of Carrillo’s hands for fingerprinting, he swung his elbow at them before a supervisor ordered the deputies to use force and restrain him.

Carrillo alleged in his lawsuit however, that both of his hands were handcuffed behind his back the entire time and the attack was unprovoked. He said he was beaten until he blacked out and then, when he came to, was sprayed with mace.

During the federal probe of the allegations, nine other deputies were convicted of crimes, including obstructing the investigation.

Carrillo was charged with battery, resisting deputies, and attempting to escape arrest. He faced up to 14 years in prison, but all charges against him were dropped a week before his criminal trial.

The beating left Carrillo with a broken nose, severe bruises all over his body, cuts and facial paralysis. He was eventually awarded $1.2 million to settle his civil suit.

Deputies face more charges in two upcoming trials, while last month former Assistant Sheriff Paul Tanaka, once the second-highest-ranking official in the department, and a captain, were indicted on obstruction charges.

Deputy Womack agreed to plead guilty to a felony charge that he lied to FBI agents when he said he did not know if Carillo was handcuffed or not.

Deputy Zunggeemoge, who had faced allegations of abuse and dishonesty, also entered a guilty plea earlier this year, court records show – but that agreement with prosecutors was sealed by a judge, keeping its contents secret.

The three Deputies convicted Wednesday were found guilty on the charges of unreasonable force and falsifying records. Ayala and Gonzalez were also convicted of conspiring to deprive Carrillo of his civil rights. The officers are scheduled to be sentenced in November.

Assistant U.S. Attorney Lizabeth Rhodes, the lead prosecutor in the case, said she would be asking for 70 month prison sentences for Deputies Ayala and Luviano.

Rhodes said the sentence for Gonzalez, who supervised the incident, should be longer however – because he has “a pattern of allowing misconduct among deputies to go unchecked in the jail’s visiting center.”

The five officers began their criminal trial on June 16. Defense attorneys for the trio convicted Wednesday maintain that they are innocent.

“We all came to the conclusion that he was handcuffed the entire time,” Jury foreman Tony Tran said. “And therefore the reports must have been falsified.”

“Gabriel Carrillo is vindicated,” attorney Ronald Kaye said. “This man was faced with losing his freedom in prison on false charges. Now the tables have turned and justice finally has prevailed.”