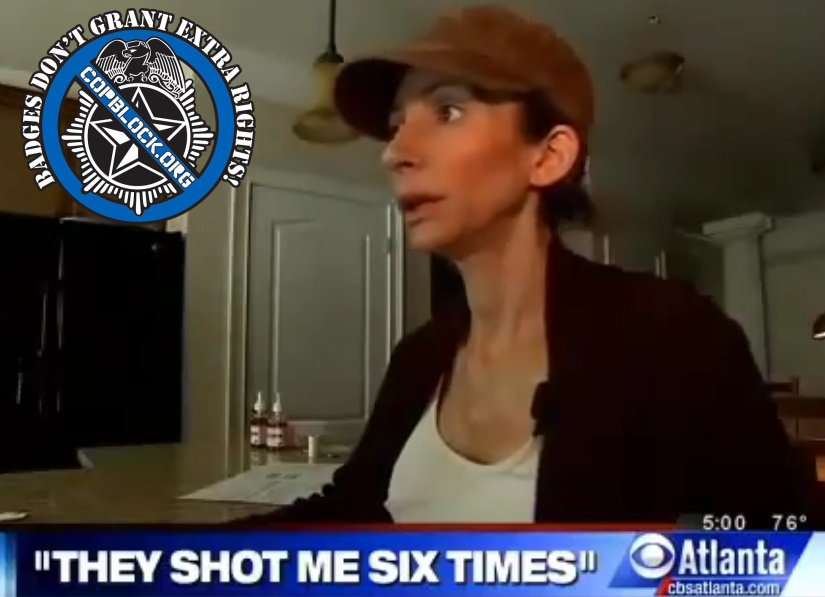 Jonathan Beavers, the founder of Georgia Cop Block, has requested a call flood in support of Amy Bramuchi, an Atlanta woman who was recently shot six times by the Alpharetta Police (see video at the bottom of the post). Amy has faced harassment over her involvement with Georgia Cop Block, as well as her involvement with Georgia Cop Block family, a group for communities in Georgia. She also believes that the incident in which she was shot was a deliberate act of retaliation against her for filing a complaint with the police department against one of their lieutenants.

The Alpharretta Police and the prosecutor are trying to revoke Amy Bramuchi’s bond and have her placed in jail, saying she was harassing them.  She has Court @9:30 am on 06/26/2015 at the Alpharretta Court house, located @12624 Broadwell Rd, Alpharetta, GA 30004. She needs folks in the area come out and show support for her at the hearing (see below for a map to the court house) to better ward off her being caged and to prevent the judge from sweeping this case under the rug. (Per her lawyer.)

The members of Georgia Cop Block are also requesting that those who are not in the area or unable to physically attend participate in a call flood. Please contact the Assistant to Public Safety Director at the Alpharetta Police Department and/or the court clerk for the Alpharetta Municiple Court to express your support for Amy Bramuchi, as well as requesting that they stop retaliating against her and end the efforts to have her put in jail. (See below for contact information.)

Below is the official police report from the original incident, which resulted in Amy being shot six times by the Alpharetta police:

Comments from Amy, regarding inaccuracies within the police report:

I want everyone to know ‪Alpharetta‬ Police Department lied in their police report and said they tried to contact me by PHONE. I have the proof they never attempted to call via phone records. AT&T confirmed the police NEVER attempted to call me prior to entering my home with a battering ram. In fact, I called 911 after they broke in because no one would tell me why they were there. I made the 911 call at 6:26.

Map to Courthouse: (Located in the “Crabapple Government Center”)

Names and badge numbers of all the police involved: