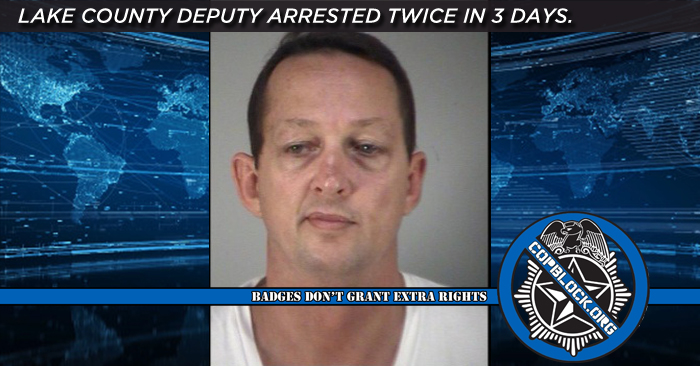 Lake County detention deputy Thomas Thompson was on a crime spree this week. He started the week out by getting himself arrested for aggravated assault with a deadly weapon and improper exhibition of a firearm. As reported in a previous post here on CopBlock.org, Deputy Thompson had confronted another driver in a Taco Bell parking lot, chased him down state road 441 in his personal vehicle, Thompson then pulled his firearm and threatened to kill him.

The driver of the vehicle admitted to launching a Taco Bell burrito at Thompson during the chase. Police found lights and sirens installed in his personal vehicle. That very same evening he had a fight with his spouse where he shoved her, causing her to fall and hit her head on a bookcase.

Deputy Thomas Thompson was now been placed on unpaid leave, pending termination proceedings after these incidents.

Wednesday evening he was again arrested at his home for domestic violence. During an argument, he shoved his wife again causing her to fall and injure her wrist. Swelling and bruising were noticeable signs of injury.

According to reports, he has a history of violence against his wife.

Thompson has bonded out of custody, has a no contact order with his wife, and is unable to posses a firearm.

If this is the way Deputy Thomas Thompson acted off duty, who only knows what he was comfortable doing with his badge on.

Unfortunately, these stories aren’t as few and far between as we would like to think. In fact, it was this type of behavior, as well as the absence of consequences that inspired the founding of CopBlock.org. After all our message is in fact “Badges Don’t Grant Extra Rights“

Deputy Thompson is just another example of a person who claims to protect you from the predators, drug dealers and killers. While at the same time victimizing the people who are closest to him. Thompson effectively sets a double standard for his behavior, and yours.