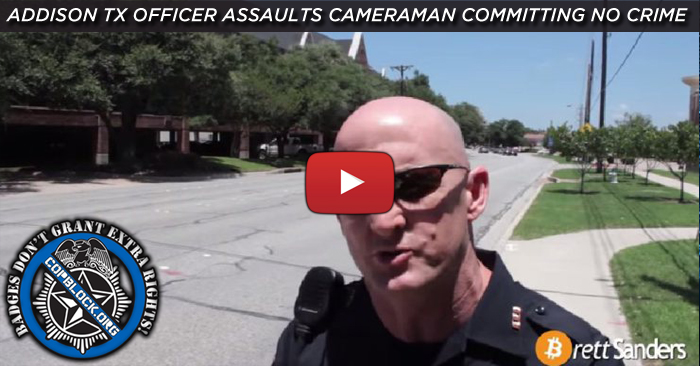 In a video uploaded to the YouTube channel run by Brett Sanders, an officer from the Addison Police Department can be seen aggressively crossing the street to confront Brett for filming the police department.  Brett was open carrying and videotaping from a public sidewalk.  He was violating no laws. The officer continues trying several more times to get Brett’s identification and each time, he refuses.  He then tells him that if he doesn’t present his ID that he is going to place him under arrest.  The officer is asked several times throughout the video to articulate what crime Brett is suspected of committing and never receives an answer.

The officer then goes hands on and takes Sanders to the ground, handcuffs, and assaults him, all while he was engaged in the legal activity of filming a police department.  He was detained for 20 minutes and given a lecture about why the police get nervous being filmed and then released.  Brett sustained an injury to his leg, which he shows in the video.

Please be aware that standing up for your rights can lead to such things as arrest, injury, and death.  Filming the police is a dangerous activity as you can see in this video.  Brett Sanders is a professional when it comes to filming the police and standing up to them when they attempt to violate his rights.  Notice that he remained respectful while flexing his rights to this bully officer that obviously thought he could push a citizen,  who was not breaking any laws, around.

I encourage you to watch any and all of Brett’s videos as he demonstrates over and over how this should be done. Hats off to Brett Sanders for keeping his cool and not bowing down to this tyrant in a costume.

Light up the phone lines at Addison Police Department and demand action be taken against Officer Bagler/Bagley, badge 179 for his flagrant violation of Brett’s civil rights.  Remind them that  filming anything that is visible from a public space is perfectly legal and is constitutionally protected activity and that “Badges Don’t Give Extra Rights.”  I hope that Brett takes legal action for this incident as this officer had no legal rights to put his hands on him and injure him.