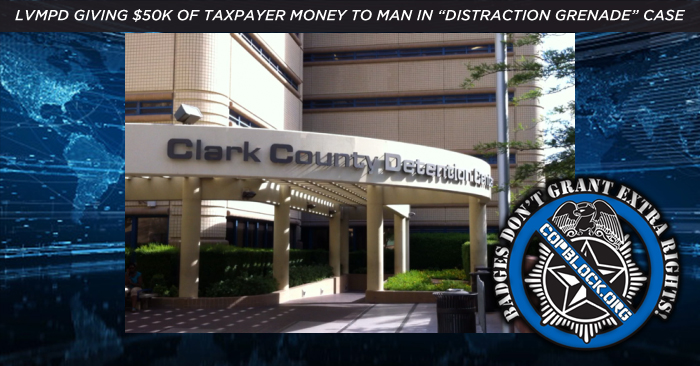 In the latest bailout of the Las Vegas Metropolitan Police Department by taxpayers, the LVMPD will be “paying” a $50,000 settlement to a man for injuries he sustained after being hit by a flash-bang grenade, while he was an inmate at the Clark County Detention Center.

The inmate, Rick Kendrick, was injured during a “shake-down due to the threat of inmate violence,” in December, according to a document in the committees agenda.

Officers were trying to throw a “distract grenade” into an unoccupied jail cell, according to the document. But the grenade bounced off a concrete beam and hit Kendrick, who was injured by a piece of the explosive.

The Nevada Corrections Department has a pretty long and extensive history of abuse and medical neglect throughout the state’s prison and jails. So, it’s not exactly shocking that yet another inmate has been injured. Of course, if the person throwing those explosives around was the one picking up the tab for those injuries, they might be a little less “distracted” (you saw what I did there) and truer with their aim.