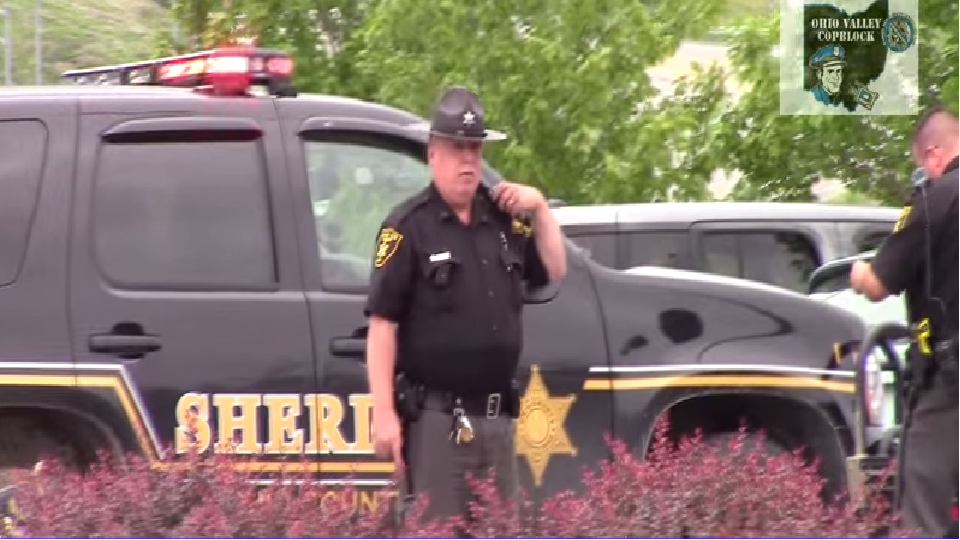 Back in September I uploaded a video to my YouTube channel titled, “Ohio County Butt Hurt Deputies.”  In the video I was subjected to a tireless amount of misrepresentation of laws and personal harassment.  This 10 minute video demonstrates the lengths at which law enforcement officers will go to try to intimidate you just to appease their hungry egos.  The video ends with a demonstration of the childish behavior they revert to when they don’t get their way.

Two weeks ago I had the opportunity to cross paths with one of the deputies from that video while recording some police activity.  The officer was Cpl. John Haglock of the Ohio County Sheriff Department out of Wheeling, WV.  I was leaving work and noticed a state police vehicle and two Ohio County Sheriff Department cars in a neighboring parking lot with their emergency lights on and decided to grab my camera and see what was going on. When I arrived, they had just put a handcuffed subject into a police vehicle moments before I started recording.  I noticed that Haglock was one of the officers at the scene and decided to stick around and record, just to see how he would react to the camera being present the second time.  I simply recorded the scene and in no way did anything to antagonize any of the officers.  I was well over 50 feet from them and in no way was interfering with their activities or causing a safety concern.

The video doesn’t show any exciting action or anything that can be construed as police misconduct.  These officers were simply doing their jobs as far as I’m concerned.  What the video does show is that this time around, Cpl. Haglock never approaches me and only throws me a dirty look when he notices me standing there with the camera.  His stare into the camera and his body language indicate that he was not happy with my presence.  I kept the camera rolling until they left.  As Haglock is exiting the lot in his car, he doesn’t even look at me while the other deputy says hello as he drives off.

I assume that a combination of being schooled by me in our first interaction and the embarrassment of so many people seeing his behavior on YouTube played a role in him not playing his games with me this time around.  I believe that he learned his lesson about not harassing a citizen that is engaged in the perfectly legal behavior of filming civil servants while conducting official business in the public.

Some of you will surely say that I was hoping to get a reaction from this officer, but I was actually hoping that he had learned his lesson and that he would not engage me again.  I am quite happy that he left me alone this time around.  By continuing to flex our rights and exposing these officers to the public, more and more officers may finally get the hint that they can’t just go around making up the laws to suit their needs and will, hopefully, instead just concentrate on doing their jobs.