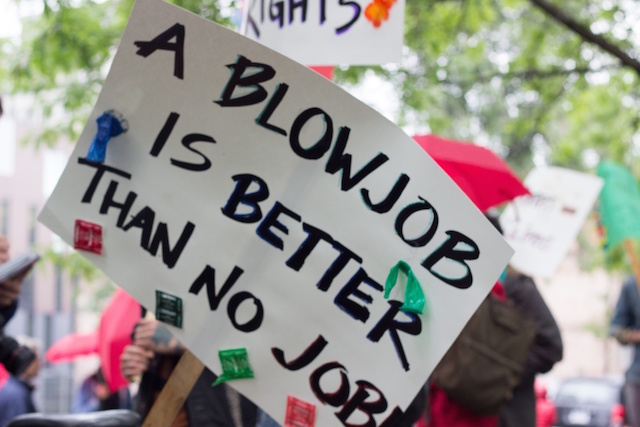 The following article was researched, written and submitted to the
CopBlock.org Submissions Page by Antonio Sanford

I have been a big fan of CopBlock.org for months now. I have a similar passion. Let me try to explain a little bit about myself. I am a single 30 year old black man. I am a native Tennessee resident born and raised. I have lived my whole life in Tennessee with the exception of a brief stint in the Tennessee Army National Guard. I became interested in the phenomena of sex work -objectively- at an early age. I grew up in the poor side of town and knew a number of “working girls.” I went to school with someone who did a porno, and I dated a stripper for a short time when I got out of the Guard.

I never looked down on sex workers. I think of them as much a part of any community as you or I. If anything, I see sex work as similar to the hook-up scene. According to my sources, the average age of a prostitute in the United States is about 24-years-old, and the average career length of a prostitute is 5 years. Most of the girls I knew wound up marrying a bouncer at the club they were working at or with a regular client. I’m not saying it doesn’t happen, but I do not personally know anyone who was murdered in this line of work, but I digress.

I suffer from chronic depression. One night I called a number that I found on back page.com. It turned out to be a sting operation. The police seized $150 from me and I was put through the justice system, which costed me another $1100 in court costs and attorney fees and a $300 John School. This is where I was exposed to the arguments against prostitution including the human trafficking argument.

I then started to do research and found many articles both in support and critical of the standard arguments against prostitution because of human trafficking. What struck me as odd was that the arguments for prohibiting prostitution to prevent human trafficking touted ridiculous numbers and never included sources for those numbers.

I have also noticed that many of the arguments used to justify the war against vices like prostitution are also used to justify racism, homophobia and other forms of bigotry (They all have AIDS, they are all on drugs, they are coming for our children, etc…)

That got me to thinking. After months of research I stumbled upon a website called the International Sex Workers Foundation for Art,Culture and Education or ISWFACE. It is filled with all sorts of information on the ridiculousness of the war against the vice of Prostitution, such as this –Operation Do the Math– informational which statistically illustrates how the humman trafficking argument is false.

My goal is to raise awareness about our group and the rights that all sex workers should have, specifically by promoting of ISWFACE and its efforts. I would also like to share a list of articles that contains more information about prostitution and sex work, including abuses commited by police against sex workers. These are reliable articles which contain vetted and proven cases and data you can fact-check yourself for consistency.

International Human Rights Standards and the Rights of Sex Workers

Sex Trafficking of Minors: How Many Juveniles Are Being Prostituted in the US?

What’s the Cost of A Rumor?- A guide to sorting out the myths and the facts about sporting events and trafficking.

An Empirical Analysis of Street-Level Prostitution