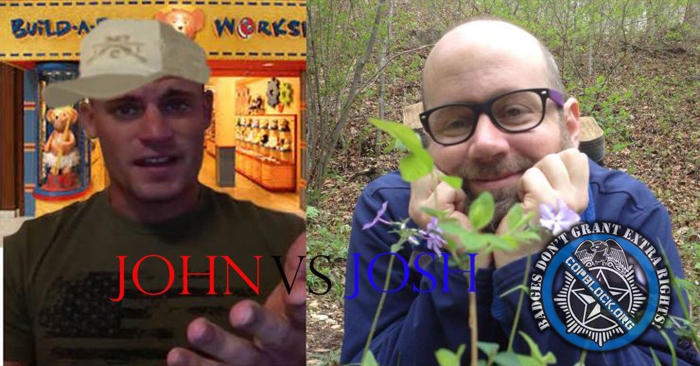 John Burk, military veteran turned Richard Simmons, is a state-loving, cop-sucking bootlicker. Don’t take my word for it, check out his videos targeting another CopBlock.org author- Joshua Hotchkin. Burk boasts about how he likes to play dirty, insinuating his personal character and intestinal fortitude are questionable at best. John Burk claimed to be a drill Sgt, and he also claims to be an articulate speaker, Still he feels its best to get his point across by screaming. He was responsible for training and shaping the minds of the younger generation of soldiers. Their first moments of military life were shaped by someone who brags about playing dirty. Does he seem like someone who should be looked up to, and revered as a model for all things righteous?

Burk calls CopBlock.org hypocritical for selling shirts in order to spread the message that “Badges Don’t Grant Extra Rights,” while at the same time using his veteran status, and your stolen tax dollars to generate revenue for his private fitness motivation business, and pushing “In the Arena” products. It appears that the money stolen from us in order to support this person while they train to police the Middle East from ambiguous terrorist threats just isn’t enough. This practice is shady. Im not a military lawyer, but I do know that you are not allowed to solicit from junior enlisted soldiers, whether off post or off duty. Considering the amount of military followers he has, its likely that junior enlisted soldiers are purchasing his products.

A soldier may, however, sell personal property or a privately owned dwelling. Although a soldier may sell something to a subordinate on a onetime, personal basis, a superior should consider the wisdom of doing so. Such sales can lead to hard feelings and may diminish the quality of leadership.

Burk claims to have “served” 3 combat tours- 1 in Afghanistan and 2 in Iraq, equating to over 4 years of combat. He claims to have served and supported the country and the military by participating in multiple invasions, and only god knows what else. If invasion and occupation are necessary for honorable service, well then John Burk should get a medal, or at least a cookie. He then goes on to attempt to insult Joshua by asking him what capacity he served in, and if he has ever held public office. Or if he has ever even performed some form of public service. The reality is that by deciding to write for CopBlock.org, Joshua has taken an active role in spreading information and swaying opinions about a dangerous and corrupt organization masquerading as protectors of the weak and defenders of the innocent.

By spreading the message that “Badges Don’t Grant Extra Rights,” and calling attention to a corrupt monopoly on the use of force, Joshua is doing more for freedom and liberty than John Burk has ever accomplished during his time in a government gang. I don’t care how many times he went to Iraq and Afghanistan, he never fought for my freedom. John goes on to ramble about stereotypes, and how stacking all cops in the bad category is comparable to blaming all black people for the riots in Baltimore. The difference is that every single cop in America retains a salary that is stolen from us in order to support them. Granted, individual cops sometimes do nice things for people, yet if a gang member grows wealthy through extortion and theft, people still recognize him as a bad guy, even if he buys the kids bikes for Christmas of hands out turkeys at Thanksgiving. Charity is not exclusively for the morally and ethically inclined.

I can tell you from firsthand experience that deploying to Iraq or Afghanistan is not some public service, nor a selfless act. In fact one should consider it the exact opposite. It is a violent act of invasion and occupation. It involves murder, torture, sexual abuse and the displacement of unknown numbers of persons who are forced to leave their homes and cities due to the danger.

Sexual abuse in the military is an often overlooked factor. Pentagon statistics report that 26,000 women and men were sexually assaulted in 2012. Yet only 3,374 cases were reported. In 2013 5,061 cases were reported. Only 484 went to trial. 376 ended with convictions, and 90 percent of the victims were involuntarily kicked out of the military. Does this seem like a system that values accountability? Domestic abuse is rampant in police families, and sexual abuse is the number two complaint, second only to brutality. Both of these institutions claiming to protect your freedom and uphold the constitution and- blah blah blah, are evidently doing the complete opposite. If they were honorable men and women their behavior would reflect that.

Street gangs are full of violence. Sexual abuse is also common. In fact it is called a “Sex in” when a female gang member joins a gang, because she has to have intercourse with multiple gang members. Trust me, I won’t go into detail, but gang bangs and rapes are also prevalent in the military. When a male joins a gang he is forced to under go a “Jump in” to prove he is worthy. The same behavior is common in the military. Hazing, and abuse of privates the lowest rank was so prevalent that the military had to make it illegal.

Most, if not all, of the actions that military and law enforcement personnel are participating in are the same behaviors they are claiming to protect us from. Armed with guns, wearing matching patches and insignias, the police and military make up two of the largest gangs to ever be created. The only difference is that they will claim to protect you before they lie, cheat or steal from you. They are known to get tattoos that represent their affiliations, and like street gangs even have their own lingo, with words such as “Hooah” or  “OORAH” and other nonsensical terms that just sound like Neanderthals coupling.

The definition of “Hooah” is literally everything but no.  The same goes for “Oorah.” The terms, when used in public, are a way for people who know what the word means to identify their mutual affiliation. If someone says “Oorah”, they are a Marine. If someone says “Hooah” they are Army.

I would like to offer a sincere apology to Richard Simmons as well. He was an effective activist as well as a fitness motivator, and it was unfair to compare him to someone like John Burk. John Burk is a coward. The worst part is, he like a cop, is masquerading as defender of the weak, and a protector of the innocent.

*Authors Note* I myself am a former U.S. Army veteran. I served for just under 4 years as a combat medic 68w before being discharged under honorable conditions. I would not recommend the military to anyone. Especially someone who is fresh out of high school. If you are considering a career in the military and would like to talk about it with someone other than a recruiter please feel free to contact me. I will do my best to answer any and all of your questions.  Also make sure to check out Jon Burke workout footage, and combat footage.