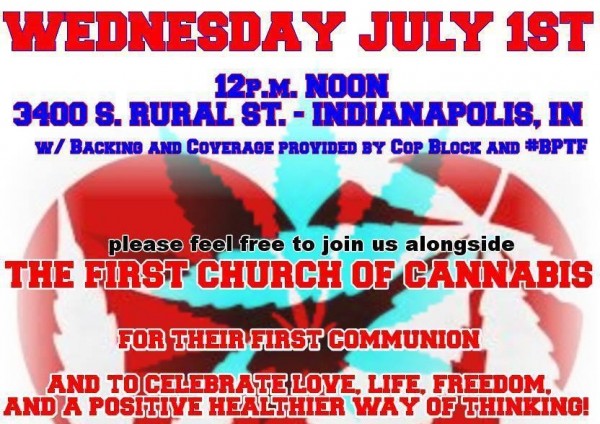 This Wednesday, July 1st, 2015, I (and hopefully many other CopBlockers) will be attending the first ever church service at the newly formed “First Church of Cannabis” at noon (see CopBlock Event here and First Church of Cannabis’s here). I decided to attend after the statements made last Friday by the Indianapolis Prosecutor and Chief as quoted in Indy’s Alternative Voice:

Prosecutor Terry Curry announced IMPD officers will be present for the service and will abide by what is law in Indiana. And the law says marijuana is illegal.

Curry outlined all of the potential causes for arrest at the church service. Anyone attending the service, if marijuana is present, could be subject to arrest for probation violation or for visiting a common nuisance even if they choose not to partake in the church’s “sacrament.” Anyone who tries to drive away from the church while high is subject to arrest for operating under the influence. Any and all possible criminal code violations will be enforced. He also stressed that no minor child should be in the vicinity of the church.

The First Church of Cannabis plans to hold their first church service Wednesday, July 1 at noon when the Religious Freedom Restoration Act takes affect in Indiana. The creation of the church is considered to be a direct response to the RFRA, which allows those with deeply held religious beliefs to freely practice those believes without interference from the government unless the state has a compelling interest. Church creator and minister of love Bill Levin contends that marijuana is the sacrament of the church and partaking of its healing and spiritual power is essential to their religion. Curry countered the use, possession and exchange of marijuana is illegal in the state of Indiana, which is the compelling interest of the government. He also said RFRA is not an immunity, but rather a cause for defense.

Curry and IMPD Chief Rick Hite agreed police officers would be present at the First Church of Cannabis Wednesday, but did not specify exactly where officers would be. Whether or not people will be arrested and hauled out of the church in handcuffs or issued a summons after the fact will depend on the decorum of the service and the number of people involved. Curry noted he spoke with Levin on several occasions and tried to come to an agreement on a “best case scenario” — one that would involve just a couple of people using marijuana and surrendering themselves to arrest instead of a whole congregation lighting up.

I can’t believe Curry actually suggested staging an arrest, as if Levin was supposed to select a few people who could spend the night in jail so he could further the fallacy that the justice system is doing anything of use to those it serves. Of course it wouldn’t actually be Curry doing the arresting, which is why Rick Hite, the Chief of IMPD, was brought into the picture. He’s the one being instructed to bring men with guns to a peaceful gathering with instructions to arrest anyone sharing their own items with another person, particularly marijuana.

I find this particular course of action chosen by Hite to be opposite of the statements he made to me while CopBlocking Downtown Indianapolis a few months ago. While CopBlocking Hite stated to me that he believe people should take more responsibility for themselves, that they should do what he called, “Policing themselves.” He also spoke of going out of his way to ensure his officers aren’t charging people with unnecessary crimes. See the entire video, posted below, for a better understanding of Hite’s double speak.

If you watched that video you might conclude that Hite would be sympathetic to some victimless crimes, or at the minimum, that folks should police themselves on such issues. Yet Hite is taking the opposite approach on Wednesday. Instead of allowing the Church goers to police themselves, Hite and Curry are going to send in men with guns to the First Church of Cannabis to intimidate the peaceful group. In fact, the police have already scared Bill Levin, First Church of Cannabis pastor, who posted this to the Church’s Facebook Page earlier today:

We will not be dragged into criminal court for their advantage. We will meet them in a civil court where the laws are clear about religious persecution. We do not start fights. We Finish Them!

Now even though that the law, even if as a loophole, has allowed the Church to be created and protects them from prosecution, Bill still has to fear the enforcers of the law. I don’t want Bill to have to fear the police, so I’m heading to Indianapolis to CopBlock the IMPD from arresting anyone on Church property. I hope you’re able to join us too, on short notice, Wednesday at Noon at the First Church of Cannabis (3400 S. Rural St – Indianapolis, IN). Join me in letting the police know that we are not afraid and we won’t let them intimidate peaceful people.

TIPS IF YOU PLAN TO ATTEND:

– Have some sort of recording device on your persons. Phone, tablet or handheld camera are perfect. If you don’t have one go with someone who does, or if you’re interacting with police ask people nearby to film you.

– If a police officer interacts with you simply ask, “Am I Being Detained or am I Free to go?” If Free to go, leave.. if they say, “you’re being detained” remain silent.

– DO NOT CONSENT TO SEARCHES! You must be suspected of a crime before you can be detained and searched. Ask the officer to tell you what crime, by statute, that you are suspected of breaking. Make sure you record this!

– (PROTIP: Caution, you could get arrested) Bring fake drugs! Know this means you might have a police interaction but if the police want to mess with people you might as well mess with them back. Roll your own cigarettes, bring new water bongs and anything else that looks, smells or feels like illegal drug paraphernalia.