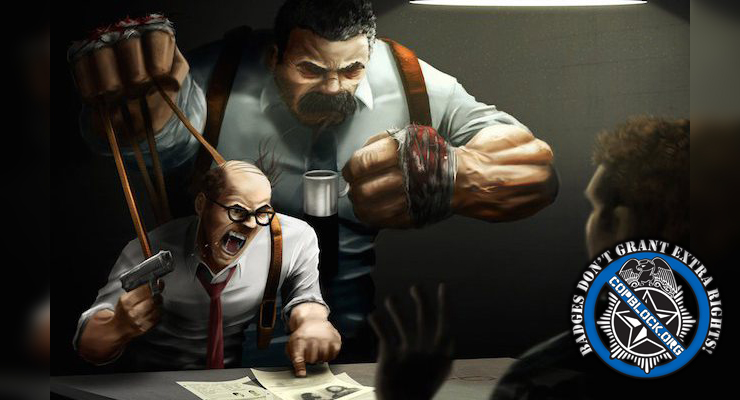 The Good Cop/Bad Cop Game is a psychological tool that is used by law enforcement interrogators. We have all seen this in television and movies hundreds of times. The suspect is left alone in a room until the strain of anticipation breaks down their defenses. At this point the ‘Bad Cop’ comes in raising hell and assuring the subject that he is already guilty and all that awaits is the nightmare the cop is about to unleash on them. After the interrogated starts to mentally break down under this new stress, the ‘Good Cop’ takes over. ‘GC’ makes comforting reassurances to the suspect that with cooperation, the worst will soon be over. ‘GC’ understands the ‘perp’ and that people make mistakes and ‘GC’ is here to help.

The psychological roller coaster this puts the interrogated under breaks their will and makes them more vulnerable to confessing their crimes. Often it works so well, that the broken individual will admit to crimes they didn’t or couldn’t even have possibly committed. That is because the psychological game of ‘Good Cop/Bad Cop’ is not intended to provide genuine results. It is specifically designed and intended to manipulate human beings, which makes their confessions far less than valid, in many cases.

In 1974, John E. Reid and Associates introduced the Reid Interrogation Method through literature and seminars. This method is the basis of the ‘Good Cop/Bad Cop’ Game. It was constructed using the following three psychological principles.

Isolation- This is the time the suspect spends alone in a strange place before the interrogation takes place. It is meant to make the subject feel alone, helpless and vulnerable.

Maximization- This where the ‘Bad Cop’ comes in and shakes the subject up by instilling fear and terror through intimidation and threats. Fear further increases the vulnerability of the interrogated.

Minimization- Enter the ‘Good Cop’, who is here to capitalize on the psychological torture and bullying by providing an empathetic and understanding ally. With his reassurances, the tormented individual is given a way out of all of the terror that has been created in them up until now.

The ‘Good Cop/Bad Cop Method’ is nothing more than a bullies game. It is the psychology of playground tyrants who terrorize for sport. Far from being a valid method of inducing genuine confessions, it is a shortcut for manipulating people into telling you whatever you want to hear, even if it could not be more obviously further from the truth. It is not method, it is pure orgiastically evil manipulation.

Now what if we applied this same psychology to the supposed dichotomy between ‘Good Cops’ and ‘Bad Cops’ in general? Might we see that, again, there really are no ‘Good Cops’?

Let us explore the way that government agencies and media operate and how they use the same tricks to blind us from the truth about our current system of policing.

Isolation- The work is already done here. We are all born alone into this world and leave it alone. In between we are left alone on a sometimes incredibly strange world in which we are prone to uncertainty and fear. The very existential angst of individual existence provides the basis for the first part of this thought control.

Maximization- We are constantly bombarded by the media and government with information that creates fear. Around every corner there is a ‘bad guy’ just waiting to get get you. And they will get you. By watching the news and reading government reports you are led to believe that we are all constantly under attack from nefarious forces who will not stop until they ruin every upstanding human beings life. We are intimidated into a position of weakness and helplessness and told that we will have to pay for being born into such a world.

Minimization- And so then along come the police and other authoritarians. They understand us, they empathize, they want to help. They realize the dark nature of our awful predicament and promise they are the one true way to salvation in this fallen world. If only you put your faith in them, absolutely and completely, they will make all the bad people and things go away. If only you agree to surrender to them your rights, dignity and liberties; you will be rewarded with the easiest way out of this mess that is our existence.

There are no ‘Good Cops’ or ‘Bad Cops’. There are good people who work as police and bad people who work as police. But they both work together in a system that is not even capable of maintaining the standards of human behavior they are tasked with enforcing. That system is no good. It is bad. It is not even that it is broken. It is bad. It is predicated upon the agendas of the ruling classes, and it is carried out under methods that are unmistakably inhumane, cruel and corrupt.

You cannot be a good chunk of apple in a rotten pie. Membership in such a predicament dictates that you are unquestionably inedible. Even the good chunks are bad by mere association with the overwhelming funk of the overall pastry.

When you willingly serve a system that is not up to your ethical standards, you lower yourself to the system. An apple that chooses to keep fellowship with a rotten bunch is already as good as bad itself. At the end of the day you may be a good person, but you cannot be a ‘Good Cop’. You cannot unrot the bunch with your freshness. You cannot change the system from within. It is the system itself that is the problem. Not because it has become broken, but because it was never intended for ‘goodness’ in the first place.

So what then of the ruling classes? Are they bad?

The ruling class as a collective are bad. They are bad because their goals and agendas are narrowly tuned towards their own interests and well being. Because their ends and means serve only the small portion of human individuals who belong to this privileged group, and often to the detriment of everyone else, they are bad for the majority of humans.

As individuals, however, they are just like you and I. They were born cold, naked and alone into this world. They face the same fear, isolation and existential angst as everyone else. Yet through chance or design they have managed to gain some semblance of power and control to help alleviate their own human condition. But it is a delusion, and deep within, they know this. That is why no matter how much power, control or wealth they accumulate, they need more. Envy and greed increase with the entitlement that comes with their delusory success.

There is no success. There is no winning life. There is only life. And we can choose to live it in ways that bring the most joy and contentment to the most amount of people, or we can allow our fears and darkness to let us be manipulated by those who are deeply disturbed by the truth that they are no better than us.

Systems of authority are the game that these ruling elite keep us trapped in. But we can break free any time we want. The games boundaries and limitations are built through our own consent and surrender. Look within yourself and find the infinite truth and beauty that resides there, and if you stare long enough, the fear disappears. And once enough of us do this, their game crumbles by the nature of its own programming and design.

“I must not fear.
Fear is the mind-killer.
Fear is the little-death that brings total obliteration.
I will face my fear.
I will permit it to pass over me and through me.
And when it has gone past I will turn the inner eye to see its path.
Where the fear has gone there will be nothing. Only I will remain.”
–Frank Herbert from ‘Dune’