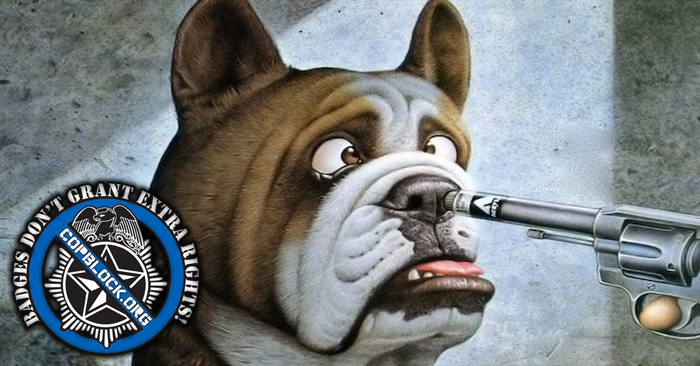 A video has been released by the New York Times of a training session for Seattle Police in the art of de-escalation. In the video one officer responds to this fine art by charging against it like a rabid rhinoceros.

“Last week, there was a guy in a car who wouldn’t show me his hands. I pulled my gun out and stuck it right in his nose and I go, ‘Show me your hands now!’ That’s de-escalation.”

A lesson in how to better deal with potentially dangerous situations quickly turned into a lesson on the current mindset of police in this country. ‘We are above you, you do whatever we say, regardless of whether it is ethical, legal or generally humane, OR ELSE!’

The unnamed officer has faced no consequences for his blatant show of disrespect for the lives of citizens. The Chief of Police, Kathleen O’Toole, has assured the media that she is checking into whether or not the maniac cops speech was within acceptable departmental guidelines, yet she never mentions looking into the incident where the cop put his state-issued service weapon in a human beings proboscis. It should be immediately clear that this mans ideologies and boundaries are not within the acceptable limits of human behavior, let alone the high standard that police tell us they strive towards. If that attempt at high standards was not just lip service, this man would be fired for the obvious threat he poses to those he is tasked with serving.

“Reform is not easy,” said O’Toole, “but I remain enthusiastic that we are at the forefront of police reform … We are addressing decades of institutional culture and embedded practices. This change sometimes requires difficult conversations.”

Reform is not possible. Reform is a lie. The cadaver of liberty and justice lies stinking before us while we dawdle meaninglessly trying to figure out how to reform it. It cannot be done. Only an absolute rethinking of how we can shift the necessary duties of police to paradigms that better serve communities will have any chance of keeping up with a rapidly evolving civilization such as ours. The cry for reform is therefore the cry of the forlorn at the casket of a loved one, a cry that attempts to bring life to what is no longer viable, no matter how impossible it is.

It is time to stop mourning some delusional Andy Griffith Super Happy Fun Police, that never even actually existed, and time for acceptance and moving forward. The choices is ours.