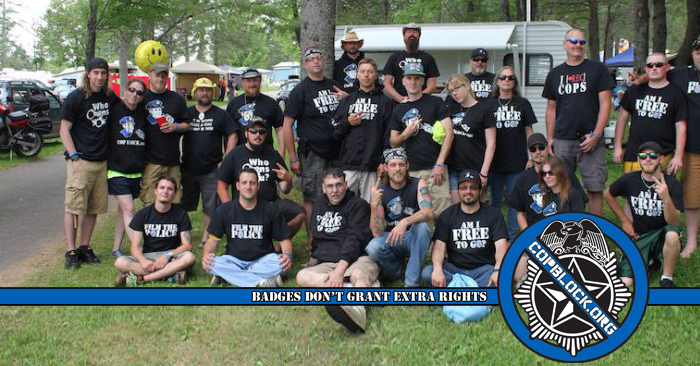 The Porcupine Freedom Festival (aka, PorcFest or PF), the summer event of the Free State Project (a 501c3, that would be pleased to have you move to NH), has been going on in New Hampshire for the past 12 years. I’ve attended the last seven of them, all at beautiful Roger’s Campground in Lancaster, and this year DEO (for his second time at PorcFest) joined me to celebrate the 12th annual gathering of the most dedicated liberty minded folks in the world.

DEO and I left for New Hampshire on Wednesday night (June 17th) from Cleveland, OH with a car full of CopBlock Gear, our cameras on stand by and with CopBlock stickers proudly displayed on the bumper. We arrived in New Hampshire around 11 am the following day and meet up with Ian, JP, Garrett and more whom are active with Keene CopBlock (amongst other things like FreeKeene.com). DEO ended up going with Tim, whom he met at PF last year, and luckily they were able to find time to cover this important story about the senseless killing of a cricket in Massachusetts (see video below). I headed to Laconia, NH to pick up more Copblock Gear from Body Covers and then to my NH families for a few days before PorcFest started.

On Sunday and Monday – the first two days of PorcFest – the rain washed most things out, as many waited until it passed to trickle into the grounds or set up their tables. Yet once the sun broke on Monday things started hopping quickly. DEO and I set up the CopBlock booth in near record time. Using some spare tarp parts from the site next door, who lost them in the storm the night before, we were able set up our spot with just a picnic table and pop up. It wasn’t long before the first CopBlocker stopped by the booth to get a new, “Am I Free to Go” T-shirt and PorcFest had officially begun.

As the title states, CopBlock contributors, supporters and fans attended Porcfest this year- but it wasn’t a CopBlock event. DEO and I might have been the only CopBlock.org contributors at PF this year, but there were several other off-shoot participants (from Virginia, New York and Maine)  along with 100’s of fans of a number of CopBlockers work. You couldn’t look in any single direction at any one time and not spot some sort of CopBlock Gear. I remember when those numbers was so much fewer that you used to be able to pick out a person for who they were simply because THEY WERE WEARING COPBLOCK GEAR.

Another change for me was that instead of talking about a project, tour or business I’m involved with, I spent more of my time this year talking to others about the new CopBlock Contributors. Many folks would come up to me to discuss their favorite story as of late from the site, only to have me correct said person because they had mistaken their (another CB contributor’s) work for my own. I enjoyed it though, as it gave me a chance to discuss with people how others are participating with the CopBlock Network (or merely the idea of CopBlock; that “Badges Don’t Grant Extra Rights”) and that many people are working feverishly behind the scenes, at the website and on the streets to make the content produced here.

Overall it was a great week for myself, CopBlock (the idea), CopBlock.org and the CopBlock Store. We sold out of nearly all our medium, large and XL hoodies, furnished a number of CopBlock supporters with stickers/handouts and conducted several interviews (notably with FreeTalkLive & Declare Your Independence Radio), including the live edition of “CopBlock Radio” on Wednesday night. We look forward to meeting and seeing you all again next year!