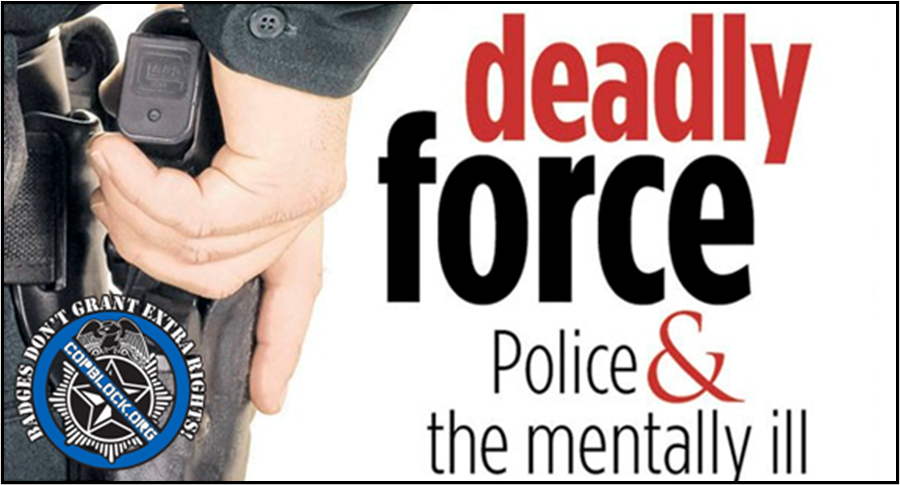 In the first half of 2015 police have shot and killed 462 people. According to an investigation by the Washington Post, 27 percent of the deceased – 124 people – were mentally ill or in emotional distress.

While the majority of the individuals were armed, the Post points out that in most cases, they were gunned down by officers who were not responding to reports of any crime.

Frequently the officers were called by neighbors and relatives expressing concern that a mentally ill family member or friend was exhibiting erratic behavior.

Most were carrying weapons far less lethal than a firearm, like knives, which rarely kill police officers. According to the FBI and other police organizations, only three officers have been killed by an edged weapon in the past decade.

The majority of individuals killed were white men who died close to home, and more than 50 of the total 124 people were explicitly expressing suicidal thoughts.

Nearly a dozen were military combat veterans suffering from post-traumatic stress disorder, and in 45 cases, police were initially called to help someone get medical treatment.

The Post reports that more than half of the killings involved police agencies that do not provide officers with proper training on how to deal with mentally ill suspects, resulting in officers responding with tactics that quickly escalated the situation.

“This a national crisis,” executive director of the Police Executive Research Forum, Chuck Wexler said. “We have to get American police to rethink how they handle encounters with the mentally ill. Training has to change.”

According to the Research Forum, police only receive an average of eight hours of training to de-escalate tense situations and spend only eight hours learning strategies for handling the mentally ill.

Mental health experts assert that police need to at least quadruple this training, and say officers should be required to spend as much time learning crisis-intervention tactics as they currently spend learning to use their weapon – which is around 60 hours.

Critics are also pointing their fingers at budget cuts for psychiatric services, which have fallen by as much as 30 percent in some states over the last several years.

“We as a society need to put more money and funding into treating the mentally ill,” said Mike Carter, a police chief in Sand Springs, Oklahoma. “We need to work with these people… before they end in tragedy.”

While there is no federal accounting of or reliable national data on police shootings of the mentally ill, recent studies show that  more than half of all people killed by police during some years have suffered from mental health problems.