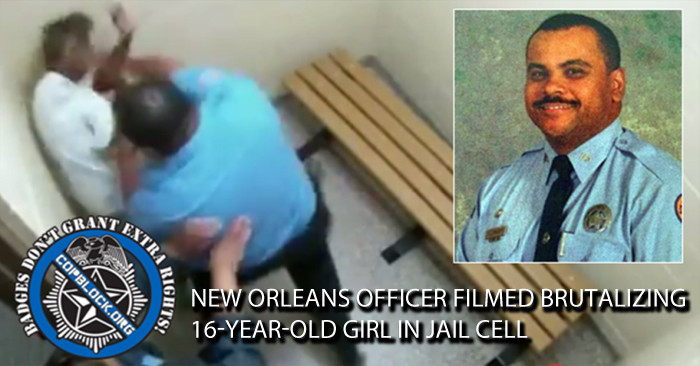 Surveillance video was released Wednesday showing a New Orleans police officer assaulting a 16-year-old girl, shoving her into a wall, and beating her with ankle shackles.

The incident occurred on Sept. 23 of last year in the city’s juvenile lockup in Gentilly, after the minor child had been arrested for purse snatching and resisting an officer.

Police say on the way to the detention center, the girl broke into a “tirade” in which she cursed at and threatened officers, insisting she had done nothing wrong, before continuing her fit while being processed into the Youth Study Center.

After being placed in a holding cell, police say the girl began banging on the door, kicking the wall and crying uncontrollably. A police report described her as flailing about and reaching “an elevated state of irrational behavior.”

The surveillance footage shows Officer Terrance Saulny enter the cell with ankle shackles before telling the girl to turn around and place her knees on the bench so she could be cuffed.

After she refused, Saulny can been seen getting physical with the girl in an effort to turn her around.

Police reports from the time of the incident said as the girl pulled back, the officer “pushed [her] away from him to create space” and “began grabbing her to get her to the floor.”

The girl continued to “passively resist,” reports said, and a “pulling match” ensued before Officer Saulny can be seen on the video shoving the girl into a wall, draw back his right hand while holding the shackles, and strike her about her upper shoulder and head.

Another officer can then be seen entering the cell and assists Saulny take the girl to the ground as he continues to strike and then shackle her.

“He went to hitting me…” the unidentified minor said. “I was crying because he had slammed me on the ground and he had hit me on my lip and my face and stuff on the bench.”

The child’s` mother told police that she was not surprised that the girl became frustrated after her arrest as she had been refusing to take her medication. The woman accused Saulny of downplaying her daughter’s injuries and said he told her in a phone call that she had fell and busted her lip.

Officer Saulny, a 25-year veteran of the New Orleans Police Department, was found to have used excessive force in the incident and was fired in June. Investigators found however, that “there was not enough probable cause that a crime was committed” to warrant charges.

Following Saulny’s firing, New Orleans police Superintendent Michael Harrison said, “There is no place in the department for officers who choose to mistreat members of the public and lie about their behavior.”

Police reports claimed the child received only “minor injuries” during the incident, but attorneys for the girl said she had to undergo at least one surgery and may need a second. It is unclear if civil action will be taken against the department.